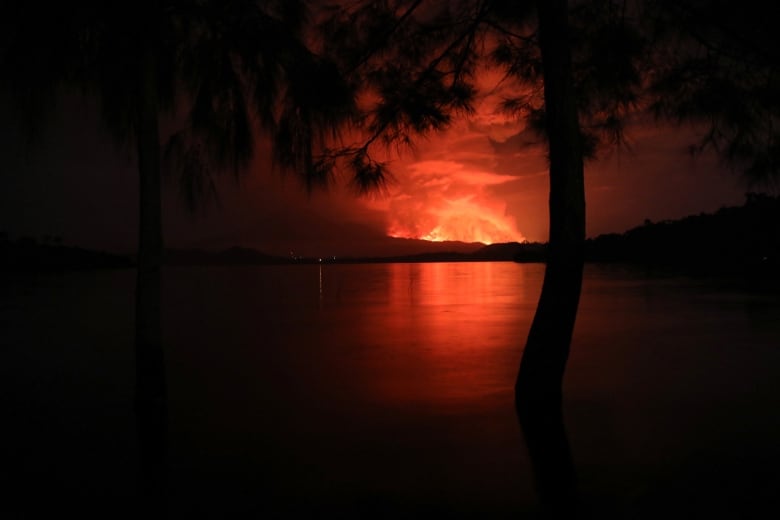 Health Minister Jean-Jacques Mbungani said upon his arrival in Goma that the delegation was set to organise support for people made homeless after the eruption after "assessing the state of affairs".

Fifteen were killed, including nine in a traffic accident as residents fled, four who tried to escape Munzenze prison in Goma and two who were burned to death, government spokesman Patrick Muyaya said in a statement.

That figure will likely rise considerably.

Damage was reported in at least 17 villages surrounding the volcano, including suburbs of Goma.

The last time Nyiragongo erupted was January 17, 2002, killing more than a hundred people and covering nearly all of the eastern part of Goma with lava, including half of the airport's landing strip.

The International Federation of Red Cross said that between 3,000 and 5,000 fled into Rwanda on Saturday, many of them peasants and farmers with livestock. Some began returning on Sunday.

Smoke rose from smoldering heaps of lava in the Buhene area near the city. Reconstruction efforts are likely to take months. Some people walked on the crust formed by hardening lava.

"There is a risk that the lava will flow on Goma", a Goma resident told the AFP news agency.

A government delegation has been dispatched to Goma to help in the response, he said.

While the U.N.'s internal security system calculated that evacuation will not be required and asked various country contingents to be on alert, a majority of them including aviation contingents evacuated immediately, the statement said.

"The night was long - there is fear in our stomachs", she said.

"The lava is flowing but not very fast", Mr Chiraba said. "Everyone is afraid; people are running away. I curse this day".

Crowds of people were grabbing their belongings and fleeing towards the nearby border with Rwanda.

A separate lava flow that headed east over unpopulated terrain toward Rwanda also appeared to have stopped, the reporter said.

"This morning, after lava flows from Nyiragongo volcano have stopped, most of Congolese evacuated to Rubavu are returning back home".

It is considered extremely unsafe because lava flows can reach up to 100 kilometres (60 miles) an hour.

Resident Richard Bahati said he was incredibly anxious about the eruption: "I lived through this volcano problem in 2002".

Volcanologists at the Goma Volcano Observatory (OVG), which monitors Nyiragongo, have struggled to make basic checks since the World Bank cut funding amid embezzlement allegations.

In a time of both misinformation and too much information, quality journalism is more crucial than ever.