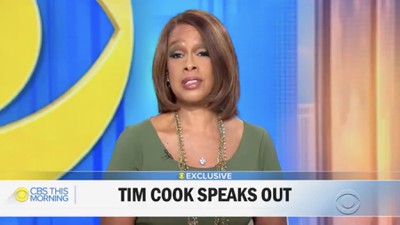 Apple CEO Tim Cook said those who breached the U.S. Capitol should be held "accountable", telling CBS on Tuesday that "we're a rule of law country".

Before you get too excited, however, it's important to note that CBS This Morning host, Gayle King, stated that the announcement concerns a "major new initiative", and not a new Apple product.

Apple CEO Tim Cook has teased an announcement coming on Wednesday, and said that everyone involved in the January 6 siege of the U.S. Capitol should be "held accountable".

Tech giants Amazon, Apple and Google have all cut ties with Parler, the social media platform popular with some conservatives. Tim said that Parler violated Apple's terms of service by not adequately monitoring posts that incite violence.

During the short portion of the interview that was played on the show today, the 60-year old Cook was asked about events that took place in the Capitol last week.

Mr Cybart also noted that Ms King "is a big hitter for CBS" and that as such it is likely the interview would really be used to announce something significant. CBS said that what it was going to tell us about tomorrow was "very exciting". "And then we need to move forward", Cook said. I don't think we should let it go. It's something I think bigger and better than that. "I think everyone that had a part in it needs to be held accountable".

Looking back at what Apple announcements are pending, the company is yet to debut the Apple Tracking Transparency feature that's scheduled to arrive early 2021.

Roman Loyola, a colleague on Macworld US, points out that in the US, Martin Luther King Jr Day is on Monday.

Aaron Rodgers, Bill Whitaker, Mayim Bialik to host 'Jeopardy!'
Richards will host for two weeks following the conclusion of the episodes guest-hosted by Ken Jennings . Whitaker, 69, is a veteran CBS News correspondent who has been with " 60 Minutes " since 2014. 1/14/2021