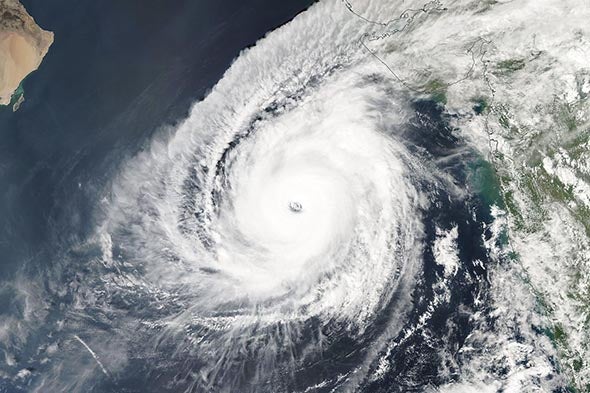 Chennai: The very severe cyclonic storm Nivar, expected to cross the Tamil Nadu and Puducherry coasts around midnight, now lay centred at 80 km from Cuddalore, 85 km from Puducherry and 160 km from Chennai, the India Meteorological Department said on Wednesday. The IMD said a storm surge of about 2m above the sea level is likely around the time of landfall, causing inundation of low-lying areas.

Besides strong winds, the cyclone is also expected to bring heavy rains.

In a series of tweets, IMD said, on Wednesday morning, that "very heavy rainfall - 120 mm - recorded in Chennai/Minabakkam" from 8:30am on Tuesday to 5:30am as of Wednesday.

"Owing to the onset of Cyclone NIVAR, Southern Railway has announced cancellation of several special train services to destinations that are likely to be affected by unprecedented rains/cyclonic landfall and to other destinations due to operational difficulties", the Railways said. The system was headed to the coast between Karaikal and Mamallapuram, and expected to make landfall near Puducherry around midnight or early on Thursday. Tamil Nadu Chief Minister Edappadi Palaniswami said government agencies are on their toes to deal with the any emergency situationin the state.

According to the weather department, Nivar is likely to be a very severe cyclonic storm and will move west-northwestwards in the next 12 hours and intensify further by November 25 evening with a wind speed of 120-130 kmph gusting to 145 kmph. Fishermen were advised to not venture into the sea for two-three days.

Houthi attack on Saudi Aramco plant damages oil tank
Charred debris, which Aramco said would be examined as part of the investigation, had been laid out on the ground. A fire caused by the attack was extinguished in around 40 minutes with no casualties, he said. 11/25/2020