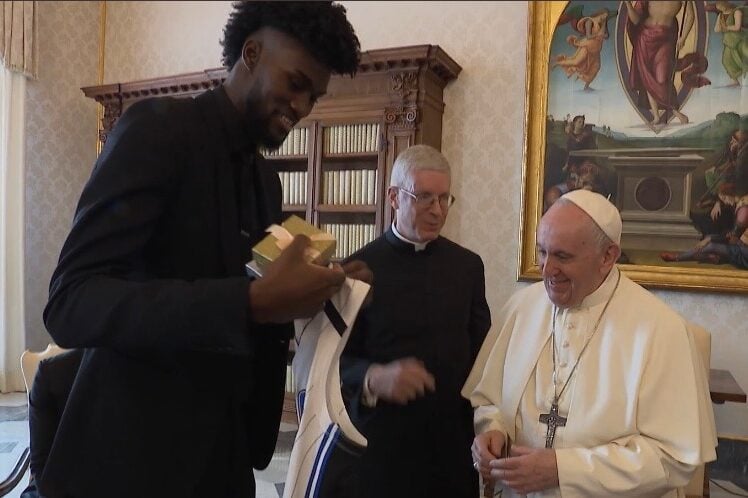 - Pope Francis met with five National Basketball Association players at the Vatican Monday to discuss their efforts to combat social and economic injustice in the United States.

The players association said the group meeting the pope November 23 included: Marco Belinelli, a shooting guard for the San Antonio Spurs; Sterling Brown and Kyle Korver, shooting guards for the Milwaukee Bucks; Jonathan Isaac, power forward for the Orlando Magic; and Anthony Tolliver, a 13-year power forward who is now a free agent.

Sources told ESPN that an assistant to the pope initially reached out to set up the meeting because of his desire to learn about their recent work and future plans to address the ongoing issues. Secretary-treasurer of the union, Anthony Tolliver, was present along with Marco Belinelli and executive director of the players' union Michele Roberts.

The meeting lasted about an hour at the papal library of the Apostolic Palace, after which the players and union officials toured St. Peter's Square.

"Kind of having a different perspective and a different stance from a lot of other guys in the league, and even the guys that showed up, to be given the opportunity to speak (to Pope Francis) was huge for me", Isaac said Tuesday. "His openness and eagerness to discuss these issues was inspiring and a reminder that our work has had a global impact and must continue moving forward".

Pope Francis said of the players "you're champions".

Putting a spotlight on racial injustice, police brutality, among other issues, the National Basketball Association and NBPA championed several social justice efforts during the restart of the 2019-2020 season in Orlando. "You're champions ... giving that good example of teamwork but always remaining humble ... and preserving your own humanity", AP reported the pope as saying. "Black Lives Matters" was painted on the sidelines. Nearly every player and coach kneeled during the playing of the national anthem before games.

Brown, in his remarks to the pope, told him about what he, Korver and the other Milwaukee Bucks went through in the NBA's restart bubble - particularly when they chose to sit out a playoff game against Orlando in response to the shooting of Jacob Blake, a Black man, by police in Kenosha, Wisconsin. The Bucks' impromptu strike inspired a wave of such actions across several sports. In early 2018, eight Milwaukee police officers surrounded Brown outside a Walgreens to investigate a potential parking infraction.

Isaac is an ordained minister, and he's also one of the few players/coaches who chose to stand during the national anthem in the bubble (as was Miami's Meyers Leonard, who spoke with SN about that decision). They will return to the USA on Tuesday morning.

"That one of the most influential leaders in the world sought to have a conversation with them demonstrates the influence of their platforms", said Roberts, who also was at the meeting.

Information from The Associated Press is included in this report.