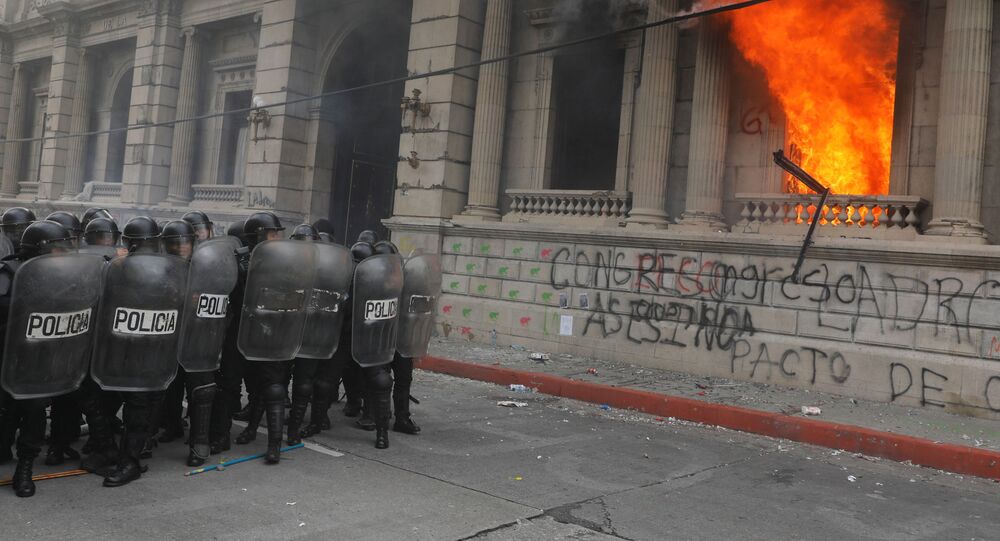 Hundreds of Guatemalan demonstrators stormed into the country's Congress in Guatemala City on Saturday, setting fire to parts of the legislative building.

Carrying the national flag and banners that said "No more corruption", "Giammattei out", and "They messed with the wrong generation", the protesters filled the central square in Guatemala City in front of the old palace.

The demonstrators, majority hooded, broke the entrance door to Congress as well as its windows, hurling flaming torches inside, with no deputies present inside the building.

Video on social media showed flames shooting out a window in the legislative building.

For approximately ten minutes, amid the chaos, the protesters managed to set fire to a part of the Congress building and also destroy everything they found around them.

"Whoever is proven to have participated in these criminal acts will be punished with the full force of the law", the President said.

Giammattei wrote on Twitter that he defends people's right to protest, but vandalizing public property can not be tolerated. As protests ramped up Saturday, he said on Twitter he was meeting with various sectors to analyze modifications to the budget. Protesters also set fire to some bus stops.

President Giammattei, who only came to power in January, has not responded publicly to the proposal.

It was a devious blow to the people because Guatemala was between natural disasters there are signs of government corruption clientelism in the humanitarian aid said Jordan Rodas the countrys human rights prosecutor.

Congress approved the budget in secret on Wednesday night.

The Roman Catholic Church leadership in Guatemala also called on Giammattei to veto the budget on Friday.

Fast start powers Popov to 64 at Pelican Women's Championship
Popov, 28, won her first and only LPGA event so far, in August when she was the surprise victor at the Women's British Open. She made substantially more money ($675,000) for that single victory than she had in her entire LPGA career. 11/23/2020

CDC recommends staying home this Thanksgiving
Pfizer said it would seek emergency-use authorisation of its vaccine from United States regulators, the first such application. It said the number traveling by auto was expected to fall by only about 4%. 11/23/2020

USA clears Boeing 737 Max to fly again
"It is likely that in our case we will adopt the decisions, allowing it to return to service, some time in January". EASA is allowing a 30-day comment period before signing off on the plane. 11/23/2020

All eyes on MI election certification
But, they warned that to ignore the irregularities would "foster feelings of distrust among Michigan's electorate". They then opted to support them, before again changing their minds and filing affidavits to rescind their support. 11/23/2020

Pennsylvania judge dismisses Trump campaign's lawsuit seeking to block mail-in ballots
Brann said that he "has no authority to take away the right to vote of even a single person, let alone millions of citizens". Everything Donald Trump's doing now is bad for our democracy. 11/23/2020

Cincinnati Bengals place RB Joe Mixon (foot) on injured reserve
Burrow did not reveal the exact nature of his injury but said "see ya next year" in a tweet later on Sunday. The Bengals, it should be noted, had not yet officially ruled out Joe Burrow for the rest of the season. 11/23/2020

These 5 People Will Get the COVID Vaccine First, Dr. Fauci Says
On 11 August, Russia became the first country in the world to register a coronavirus vaccine, dubbed Sputnik V. Read on to find out who will likely top the list, and for more advice from Fauci, check out the 4 Places Dr. 11/23/2020

Guterres: We've been slow to acknowledge racism inside UN
President von der Leyen said: "I am glad that G20 leaders agreed to make Covid-19 vaccines available and affordable for all". The event was a jarring reminder of the changes the world has undergone this year in response to the coronavirus pandemic. 11/22/2020

California enacts night curfew with rise in COVID cases
Jones said, "Well, we won't be enforcing that, or any of the other orders that are in existence now or might be coming". Under the order, non-essential work and gatherings must stop from 10pm-5am in counties in the purple tier. 11/22/2020