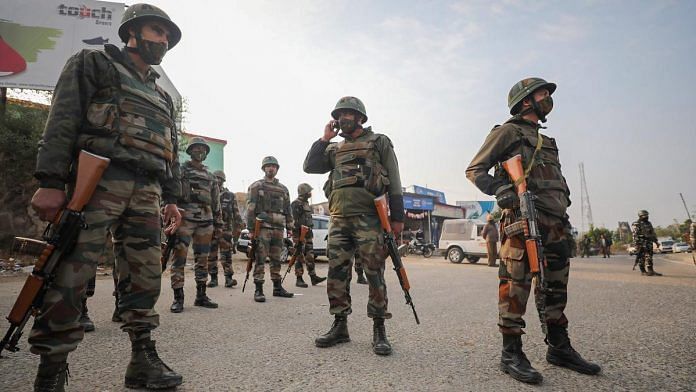 Director-General of Police Dilbagh Singh said, "by successfully eliminating all four terrorists of Jaish-e-Mohammad terrorist outfit we have foiled an attempt made by the Pakistan based terrorist outfits to sabotage peaceful conduct of District Development Council (DDC) polls beginning Nov 28 in Jammu and Kashmir".

Earlier today, Modi held a review meeting with the top security brass, including Home Minister Amit Shah, as it emerged that Jaish-e-Mohammad terrorists killed in an encounter on the outskirts of Jammu, were planning a big terror operation on the anniversary of the 26/11 Mumbai attack.

The encounter began at 5am this morning when a group of terrorists moving towards Srinagar when they were cornered at the toll plaza near Nagrota. We are providing them collective security and they are being put up in secure areas.

Singh also said that the truck driver is absconding and the police has launched a manhunt for him.

CRPF and police personnel moved to search the vehicle and came under fire of the terrorists hiding in the truck.They retaliated resulting in an encounter.

Many tunnels being used by the infiltrators have been detected by the Border Security Force in the last few years.

A large number of weapons, including 11 AK-47 rifles, three pistols and 29 grenades, were recovered from them.

"When the Valley infiltration is effective and layered in-depth it is inevitable that Jammu becomes the centre and route for sending in human resources and wherewithal to Kashmir".

Meanwhile, as many as 12 civilians were injured after terrorists lobbed a grenade at security forces in the Kakapora area of South Kashmir's Pulwama district on Wednesday.

Army Chief General Manoj Mukund Naravane had said terrorists whenever cross the Line of Control to infiltrate into India would be dealt with in the same manner and would not be able to go back. A team of the National Investigation Agency (NIA) reached the spot to probe the incident. Since the case is similar to several such previous attempts by Pakistani terror outfit JeM, the case could be transferred to the NIA.