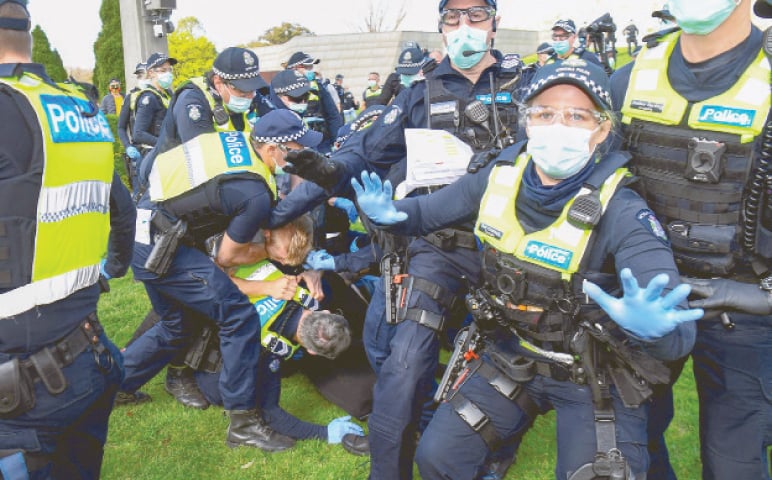 There were 41 new cases reported and 9 lives lost to coronavirus in the last 24 hours in Victoria.

The state's total death toll stands at over 660, while the total number of confirmed cases has surpassed 19,500.

'We are talking to the Victorian government and they will have to come to the party'.

Ms Carnell said the Victorian government needed to step up and pick up some of the more prohibitive costs such as break lease fees, because "its not the business" fault that they can't open, it's the government's'.

Outside of Victoria, NSW recorded 10 new coronavirus cases on Sunday, including two year seven students from a Sydney Catholic school.

"What small businesses are telling us is that they are giving up", she told Nine's Today program on Monday.

Mr Merlino said the worst thing the government could do for business was open up and then a few weeks later reimpose restrictions because of a third wave.

Starting from 11.59pm on Sept 13, some stage four restrictions will begin easing in Melbourne, with the nightly curfew starting at 9pm instead of 8pm.

"There are many in our community, whether they be residents or businesses owners, who are doing it extremely tough at the moment due to the current level of restrictions, despite very few cases of coronavirus in our region since this whole pandemic started", Cr Clemence said. People will be allowed outdoors for up to two hours instead of one, and those living alone will be allowed to have a visitor.

Across the state, people have been ordered to stay at home except for essential work, medical care, provisions, or exercise since early August.

Schools will also partially reopen and outdoor gatherings of up to five people would be allowed.

Melburnians will be freed from the lockdown from October 26 if the average number of new cases falls below five and there are less than five unknown source cases.

Andrews said that despite the impact of the lockdowns on Victorians and the economy, modelling had clearly shown that to reopen prematurely would lead to a rapid increase in case numbers.

'I want a Christmas that is as close to normal as possible and this is the only way, these steps are the only way that we will get to that point'.

All remaining restrictions will be removed when Victoria goes 28 days with no new cases.