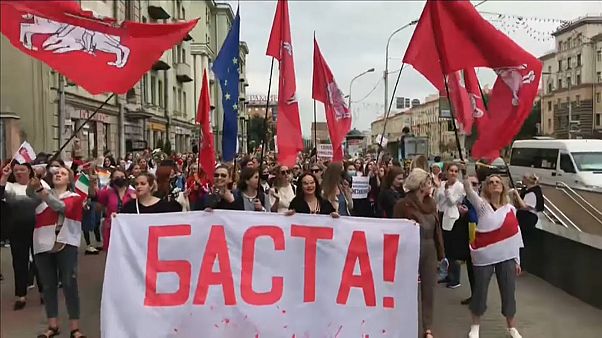 Maria Kolesnikova, a member of the Coordination Council created by the opposition to facilitate talks with President Alexander Lukashenko on a transition of power, was reportedly put on a minibus in the capital, Minsk, and driven away by unidentified people.

Her disappearance follows a massive rally Sunday in Minsk that drew an estimated 100,000 protesters demanding the resignation of Lukashenko, who extended his 26-year rule in an August 9 election that the opposition and some poll workers say was rigged. They are small-scale in the regions.

Around 250 people were arrested nationwide including 175 in Minsk, according to the Viasna rights group. Security forces detained 633 protesters, Belarusian authorities said.

Belarusians have been demonstrating across the country for almost a month even though the protest movement lacks a clear leader, with many activists jailed or forced out of the country. At least four people are reported to have died during the demonstrations.

© Tut.By/Via Reuters People attend an opposition rally to protest against police brutality and to reject the presidential election results in Minsk, Belarus Sept. 6, 2020.

The protests are unprecedented in Belarus, which has been under Lukashenko's rule since 1994.

As the rain fell down, they converged together from different districts of the Belarusian capital in the city centre, initially heading for Lukashenka's residence - the Independence Palace.

Students wore red and white opposition colors as they protested Lukashenko for the fourth week across the city.

The European Union has already slapped sanctions on the Belarus Government in response to what it sees as a sham election result.

"Protesters want the long-time president to resign after his re-election last month amid allegations of ballot-rigging".

Kolesnikova is the last of three female politicians left inside Belarus who joined forces before an August 9 presidential election to try to challenge veteran incumbent Alexander Lukashenko.

Her alleged detainment comes after authorities in Belarus launched a tough crackdown on protests over the weekend.

Authorities also have revoked the accreditation of many Belarusian journalists and deported some foreign journalists, including two Moscow-based Associated Press journalists.

Kolesnikova entered the spotlight in July, when her boss, Viktor Barbariko - initially considered the leading opposition challenger to Lukashenko - was arrested and prevented from running against Lukashenko.

More news: What to expect from Apple iPhone 12 in September Event 2020

Typhoon Haishen hits South Korea after battering Japan's southern islands
But many emergency shelters are accepting fewer people and turning away evacuees to prevent coronavirus infections, NHK reported . Authorities in Japan have ordered at least 200,000 people to evacuate certain areas of the country due to an approaching storm . 9/07/2020

Leinster Continue Historic Run With Victory Over Munster
Leo Cullen's men will now look forward to the challenge of facing the victor of tomorrow's game between Edinburgh and Ulster . Johhny Sexton then made Munster pay for their misses by nailing a penalty in the 68th minute extend the lead to 13-3. 9/07/2020

Study Warns: Vitamin D Deficiency May Raise Risk of Getting COVID-19
People who are deficient in the sunshine vitamin are nearly twice as likely to contract COVID-19, according to a new study. Dr Meltzer himself is doing his best to get some daily sunshine, as well as taking vitamin D supplements. 9/07/2020

Cong Leader Kavitha Reddy Apologises for Attacking Actress Samyuktha Hegde
In a statement on Sunday, Reddy denied the charge and said she had just asked the actor to respect the basic rules of any park. The Congress leader had apologised on her Twitter handle saying that she committed a mistake for "reacting aggressively". 9/07/2020