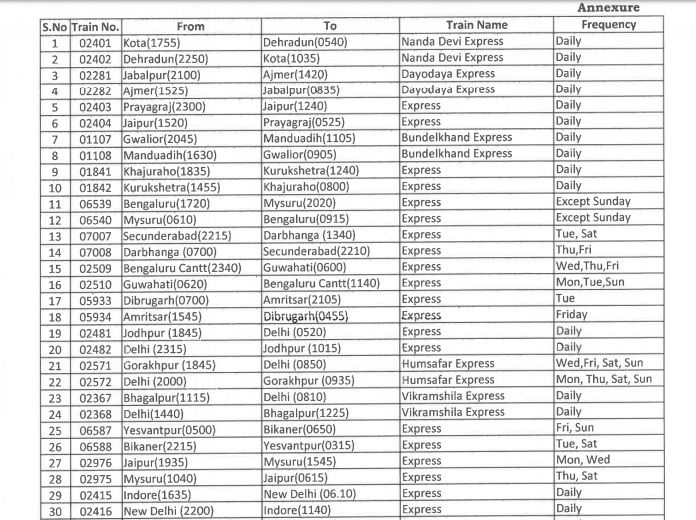 Reservation of tickets for these trains will start from September, 10, informed Vinod Kumar Yadav, Chairman of Indian Railway Board.

Yadav also said all trains that are now in operation will be monitored regularly to find out which trains have a long waiting list and railways will run more trains on such routes.

The Railways has suspended the passenger, mail and express train services from March 25 amid the nationwide lockdown to combat the spread of Covid-19 pandemic.

Though the Centre has not yet ordered the restart of suburban train services, Eastern Railway has chalked out plans to ensure Covid-19 safety norms are followed at stations once local trains start running. The reservation for the same will begin from September 10. The railways will also introduce "clone trains" that will run just ahead of the ones which have a long waiting list for more than seven to ten days.

"Eighty new special trains or 40 pairs of trains will start operations from 12 September".

Several other inter-state trains will be run on some routes where migrants are heading back to their places of work, added Yadav.

Moreover, whenever there is demand from states for exams or other similar purposes more trains would be operated. The occupancy of special trains is being monitored on a regular basis and additional special trains may be run based on the requirement, the national carrier said.

He also rejected media reports that the railways may stop operating about 500 trains.

Officials at the Central Railway had issued a statement regarding the same, which said that since the government has allowed travel from one district to another, the department is starting inter-district passenger transport by rail.

Yadav also announced that the Railways will begin the recruitment process for 1.40 lakh posts in three categories from December 15. "Scrutiny of these applications was completed, but due to coronavirus pandemic a computer-based examination could not be completed", Yadav said.