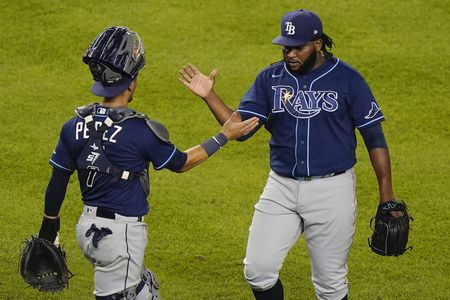 Benches cleared with two outs in the ninth inning of New York's win over the Rays when Aroldis Chapman almost hit Tampa infielder Mike Brosseau in the head with a 100-mph fastball.

Chapman said the pitch was not intentional and he is appealing the suspension.

After a Pittsburgh Pirates-Minnesota Twins game in August wound up in a "drone delay" thanks to someone flying an unauthorized drone around Minnesota's Target Field, the pattern repeated Wednesday night at Yankee Stadium during a Tampa Bay Rays-New York Yankees game.

Brosseau capped Tampa Bay's four-run first inning against Jordan Montgomery (2-2) when he hit a 2-2 curve an estimated 420 feet into the visitors' bullpen beyond the left-center fence.

The only hit batter was the Rays' Hunter Renfroe, who was plunked in the leg in the fifth inning by a 95 miles per hour fastball from Yankees reliever Ben Heller, who was promptly tossed by first base umpire Chad Fairchild. Brosseau made it 5-0 in the fifth by hitting an 0-1 fastball into the Yankees' bullpen in right-center.

The benches cleared for a few moments, though the bad blood boiled into the postgame presser when Rays manager Kevin Cash called out the Yankees and seemingly threatened them by referencing that his pitchers could throw 98 miles per hour.

More news: All You Need To Know About Current Oil Price

Boone and Cash were scheduled to serve their suspensions Wednesday as the Rays and Yankees wrapped up a three-game series in NY.

The only hit batter was Hunter Renfroe in the fifth. John Curtiss (2-0) followed Morton and pitched 2 1/3 scoreless innings for the win. DJ LeMahieu hit an RBI single in the ninth, but Peter Fairbanks retired Luke Voit to end it.

The drone was out of the area within a few seconds, then a few minutes later the game continued. The second-base ump just pointed at something and now the Rays are leaving the field.