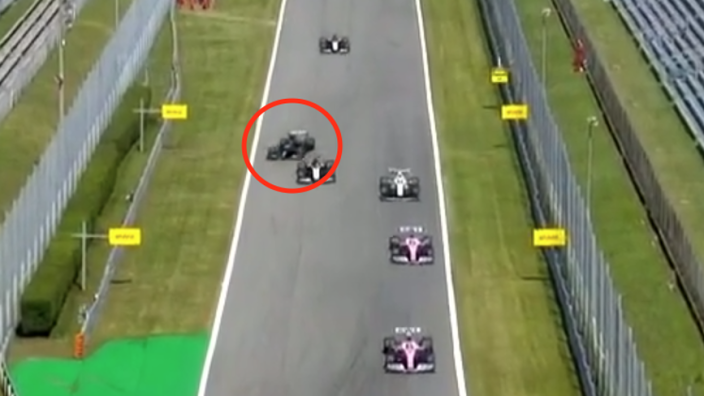 It is the first time the Italian Grand Prix has been red-flagged since 1995.

The Italian Grand Prix was halted on Sunday to allow for repairs to the tyre barrier after Ferrari's Charles Leclerc crashed heavily at Monza's Parabolica.

Hamilton led the race's early stages but was handed a costly stop-and-go-penalty for pitting when the pit lane road was "closed" after Kevin Magnussen's Haas stopped at the side of the track. Hamilton had pitted immediately after the safety vehicle had been deployed after Kevin Magnussen broke down but was unaware the pit lane was closed as the marshals recovered Magnussen's Haas.

Hamilton "won" the re-start on lap 28 and pulled clear as Stroll cut the first chicane.

He soon started lapping three seconds faster than anyone else and caught the field in no time, scything past auto after vehicle for a useful haul of points.

Leclerc's crash prompted a red flag, briefly suspending the race, which has thrown the result of the race completely up in the air following the stewards' decision to give Lewis Hamilton a 10-second stop-go penalty when racing resumes.

The six-time champion dropped to the back of the field but raced back through to the points and seventh to minimise the impact on his championship lead.

The Spaniard closed that down to be right on his tail at the start of the last lap but Gasly managed to hold him off.

More news: More people in the Quinte region are getting back to work