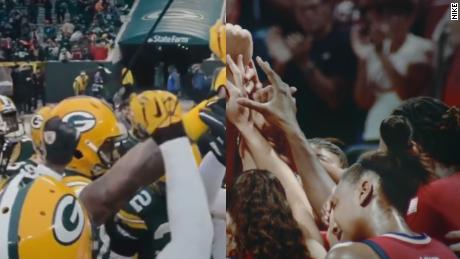 Nike seems to have outdone itself with its latest advertisement, even for a brand known for its exceptional commercials.

More news: Basketball-WNBA to play season at single site in Florida without fans

"Players may be back on the pitch, but we are not going back to an old normal". That's the message of the awesome, inspiring, moving new Nike commercial "You Can't Stop Us" posted today by the global athletic brand. Nike's team reportedly combed through 4,000 pieces of footage to create the astonishing montage that has won high praise on social media, collecting more than 13 million views in less than a day on Twitter alone.

Throughout this ad, we are met with footage of various athletes playing their given sport, all while Rapinoe speaks on how these athletes have found a way to practice during the pandemic.

Since the coronavirus has postponed all sporting events, Nike wanted to point out that, despite the situation, the sport still has the power to unite us. "You can't stop sport". Keeps us pushing ahead. "No matter what, we will always come back stronger, together", the company wrote on YouTube while sharing the video. "Because you can't stop us".

The new ad comes with a marvelous editing that will leave you completely astonished and might make you watch it over and again.