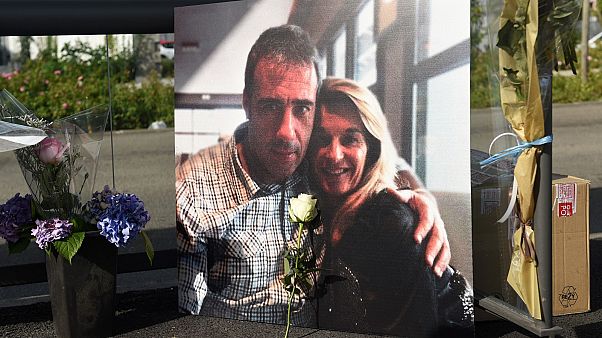 Thousands of people took part in a silent march in Bayonne for Philippe Monguillot, 59, who was declared brain dead after an attack by passengers who refused to wear face masks.

Veronique Monguillot said she told Mr Darmanin that she and their three daughters were "destroyed" by the attack on her husband.

Mr Monguillot was attacked in the southwestern town of Bayonne on Sunday after he reportedly asked three passengers to wear masks - in line with coronavirus rules across France - and tried to check another man's ticket. The other two men have been charged with non-assistance to a person in danger and one has also been charged with attempting to hide a suspect, the local prosecutor's office said.

French Prime Minister Jean Castex said the incident "touches us in the heart" and those involved will be punished for this "abject crime", he wrote on Twitter shortly after his passing.

Face coverings are mandatory on public transport in France, where the death toll from the CCP (Chinese Communist Party) virus has claimed over 30,000 lives.

Monguillot was hospitalized and declared brain dead after the July 5 attack at a bus stop in Bayonne, in southwest France.

The Bayonne prosecutor said Monguillot was assaulted after he asked four passengers on his No. 810 bus to wear face masks, which are required aboard French public transport because of the coronavirus pandemic. "The doctors were in favour and we were as well", she told AFP. "We must stop this massacre".

He said: "This [the attack] was a totally odious and unjustifiable act and I trust the magistrate to work with investigators of the Bayonne police to do everything possible to deal with those who committed these barbaric acts".

Hundreds of rivers swell as China summer flood season revs up
Conservationists also warn that the rapid melting of Himalayan glaciers due to climate change may lead to more unsafe summer flooding. 7/13/2020