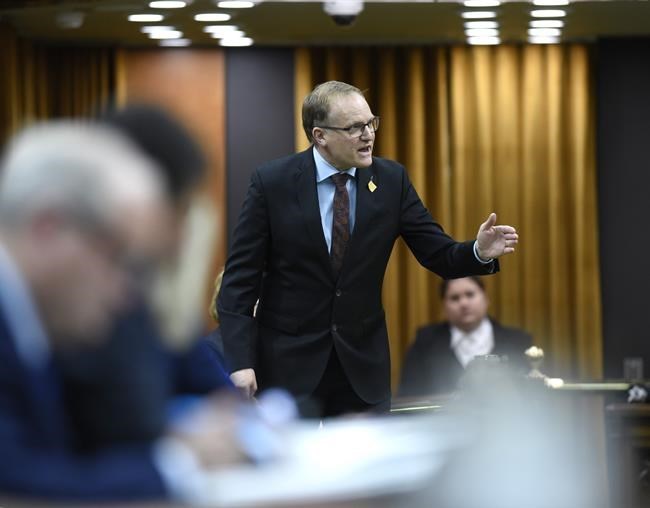 Finance Canada provided little insight into when it would begin unwinding the CERB program in particular, saying only that it would "make necessary changes to the program later this summer so people can have the help they need while supporting the recovery".

The federal Liberals are to layout this afternoon how they see the virus affecting government finances for the fiscal year including an estimated deficit and a projected path for the economy.

Spending levels are on a similar level to the spending during the Second World War. They will point to the size of our deficit for 2020-21.

The federal debt is set to pass $1 trillion, by the Finance Department's estimates.

Finance Minister Bill Morneau is to release what the government has styled a fiscal and economic snapshot. The Minister says that the federal government has used its strong fiscal position to stabilize the economy and support Canadians by putting in place the largest economic aid package in generations. The federal debt-to-GDP is expected to rise to 49.1 per cent from 31 per cent. Economists expect the economy to contract by 6.8 per cent in 2020, before rebounding by 5.5 per cent in 2021.

"Our government knew that the cost of inaction would have been far greater", he said. But the road towards recovery remains long and uncertain. Today, and in the months to come, our economic health will largely depend on our public health.

This has been doled out through a number of aid programs for Canadians, such as the Canada Emergency Response Benefit ($53.53 billion), the Canada Emergency Student Benefit ($1.42 billion), the Canada Emergency Wage Subsidy ($18.01 billion) and various top-ups to benefits such as the GST, Old Age Security and Canada Child Benefits, as well as loans and grants for business of all sizes. "Representing almost 14 per cent of Canada's gross domestic product (GDP), the Plan includes more than $230 billion in measures to protect the health and safety of Canadians and provide direct support to Canadians, businesses and other employers, and up to $85 billion in tax and customs duty payment deferrals to meet liquidity needs of businesses and Canadian families".

Conservative leader Andrew Scheer, the leader of the opposition, called it a dire picture. Instead, Justin Trudeau once again put Liberals first.

During the news conference, Trudeau said that he speaks "reasonably regularly" with President Trump and that he planned to congratulate him on the new trade agreement between Canada, Mexico and the U.S.

Meghan seeks to block naming of friends in Mail on Sunday case
The duchess said in her statement Thursday that the five friends made the choice on their own to speak to People . Markle sued the tabloid for releasing her private letters to her dad. 7/10/2020

Tropical Storm Fay Triggers Warning for Parts of the Northeast
"During a Tropical Storm Warning, prepare your home and review your plan for evacuation in case an evacuation order is issued". According to forecasters, Fay will experience slight strengthening into Friday before it weakens as the center moves inland. 7/10/2020

'No need' for another US-N Korea summit - Kim's sister
Diplomatic observers have expressed concern over differences between the US and South Korean approaches toward Pyongyang. Earlier this week, Trump said he was open to meeting again with Kim Jong Un. 7/10/2020

WhatsApp Animated Stickers Are Here: Here’s How You Can Use Them
Not only are they more pleasing to watch, but they might even be more expressive to the people you are sending the stickers to. WhatsApp has just added a new feature for its massive user base that now lets you add some fun in your chat windows. 7/10/2020

Dutch police arrest farmers protesting emission cuts
The chats also helped the police identify intended victims, who the police said had been informed and had gone into hiding. A search of the containers uncovered bags containing tools including hedge cutters, scalpels and pliers. 7/10/2020

'No screaming' allowed on roller coasters as Japan theme parks reopen
The takeaway message, according to The Wall Street Journal , was: "Please scream inside your heart". Customers told the park that the new rules were "severe" and "impossible", it said. 7/10/2020

China's Kazakhstan Embassy Warns Citizens of Pneumonia Deadlier than Covid-19
Many organisations including Kazakhstan's health department are studying the "virus of this pneumonia", the embassy said. Chinese nationals have been urged to protect themselves in the same way as they have done with coronavirus. 7/10/2020

WNBA Players Canceling Sen. Kelly Loeffler for Calling BLM 'Divisive'
I'm pretty sad to see that my team ownership is not supportive of the movement & all that it stands for. The WNBA players union simply demanded that Loeffler be thrown out of the league. 7/10/2020

NHC: Tropical Storm Fay forms east of North Carolina
The potential Fay could be a subtropical system, which would have some of the features of a tropical storm, but not all of them. Tropical Storm Warnings are in effect for coastal New Jersey, New York , Long Island, and CT . 7/10/2020

Everton held at home by improving Southampton
The visitors are in good form travelling to Merseyside, having won three of their last four games in the Premier League . Richarlison's 75th-minute goal broke a 1-all tie and eventually gave Everton that November triumph over the Saints. 7/10/2020

Mary Kay Letourneau Dead at 58 After Cancer Battle
Gehrke , tells us Mary Kay had been in hospice care for the past month, and Vili had been by her side. helping take care of her. Mary Kay Letourneau , the former Washington state teacher who raped a 12-year-old student and later married him, has died. 7/10/2020

Kanye West to run for U.S. president, no longer supports Trump
His words were blasted by Planned Parenthood , an organization that his wife, Kim Kardashian West , praised just a few years ago. His running mate will be Michelle Tidball , a preacher from Wyoming, according to Forbes . 7/10/2020

Champions League last 16 second leg venues decided
Teams will be able to register a maximum of three new "List A" players, but each squad is still limited to 25 List A players. The 2019/20 UEFA Champions League has been on hold since Wednesday 11 March due to the COVID-19 outbreak. 7/10/2020