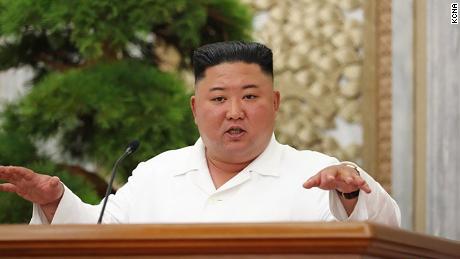 The head of the hermetic totalitarian state spoke at a Worker's Party politburo meeting yesterday that discussed the impact of the virus, six months after North Korea closed its borders and put thousands into isolation.

Analysts say the North is unlikely to have avoided the contagion and that its ramshackle health system could struggle to cope with a major outbreak.

South Korea is now recording around 40 to 60 cases a day, while China saw a surge of infections in Beijing last month.

At the meeting, Kim stressed the need "to maintain maximum alert without a slight self-complacence or relaxation on the anti-epidemic front, and rearrange and practice stricter anti-epidemic effort under the prevailing situation".

It cited him as saying: "We have thoroughly prevented the inroad of the malignant virus, despite the worldwide health crisis".

"He has repeatedly said that hastily lifting anti-epidemic measures would result in an unimaginable and irreparable crisis", notes KCNA.

His comments are an indication that North Korea will maintain its self-imposed blockade, which has also hit trade with China.

While the reclusive country has not confirmed any infections, its public health ministry has reported all 922 people checked so far have tested negative.

On Monday, U.S. Deputy Secretary of State Stephen Biegun, who led working-level negotiations with North Koreans, said there is still time for both sides to re-engage and "make substantial progress".

More than 40% of the population was already considered food insecure before the coronavirus crisis, with many cases of malnutrition.