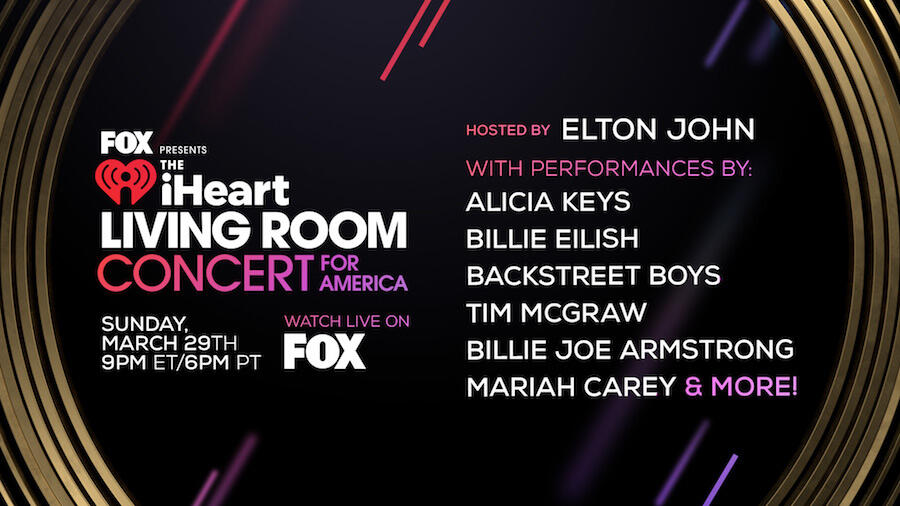 With Americans stuck at home and actual concerts on hold for the foreseeable future, iHeartMedia and Fox have teamed up to simulcast performances from some of music's biggest artists - playing from the safety of their living rooms.

Others lending their star power for Sunday's event include Elton John, who will serve as host, Alicia Keys, The Backstreet Boys and Green Day front man Billie Joe Armstrong. Every artist filmed their performances from their homes using their own audio and video equipment as the public continues to practice social distancing to help prevent the spread of the virus. It can be watched on FOX or listeners can tune in worldwide on iHeartMedia radio stations.

Elton John is hosting a live benefit show to raise funds for Feeding America and First Responders Children's Foundation in the midst of the Coronavirus (COVID-19) crisis. The benefit will air in place of the postponed 2020 iHeartRadio Music Award.

In addition to airing on FOX, the special concert will also be available for viewing on all digital platforms on the network.

As we've discovered only weeks into the coronavirus pandemic, celebrities coming together to help the cause can be more cringeworthy than comforting. For some, especially older adults and people with existing health problems, it can cause more severe illness, including pneumonia and death.