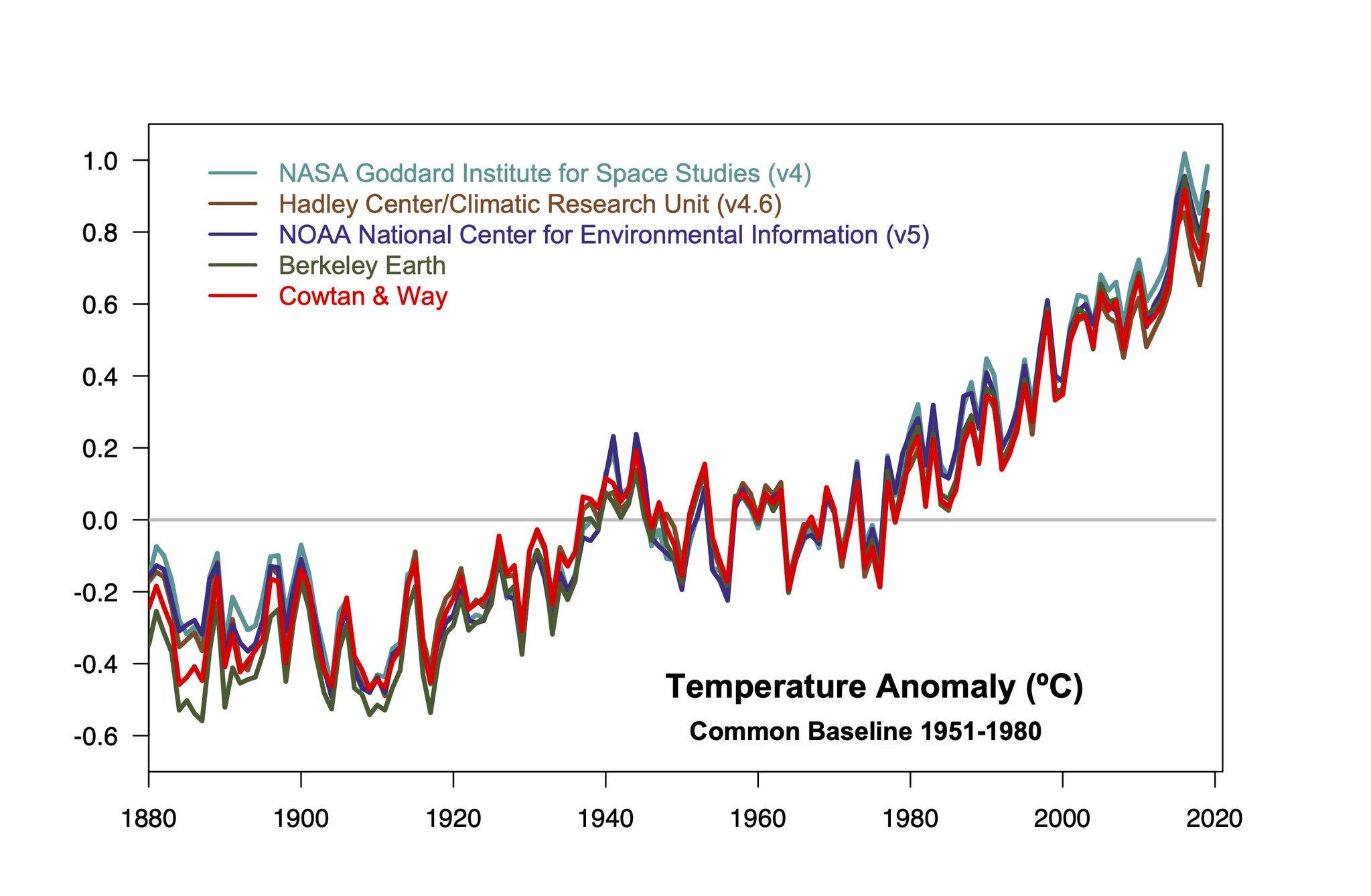 Earth has been on a clear warming trend for decades now, and 2019 did nothing to change that.

2016 remains the warmest year on record, when temperatures were boosted by the El Niño weather phenomenon.

The records, which scientists began compiling in 1880, show that the last five years have been the planet's warmest, with 2016 now topping the list by just 0.07 of a degree Fahrenheit.

A national record of 46 degrees was set in France, and a similar one of 42.6 degrees was observed in Germany.

It is compiled from millions of air and sea surface temperature measurements taken across the globe from land on all continents and from all oceans. In 2019, Earth, relentlessly warming, was more than 2 degrees Fahrenheit (just over 1 degree Celsius) warmer than it was in the late 1800s.

But taking the evidence from the three records, together with other estimates from reanalyses, suggests that 2019 was most likely the second warmest year.

According to NOAA, the past five years have been the hottest five ever, nearly 1.7 degrees (0.9 C) warmer than the average in the 20th century.

Dr Colin Morice, from the Met Office Hadley Centre, said: "Our collective global temperature figures agree that 2019 joins the other years from 2015 as the five warmest years on record".

Addressing such concerns, NASA says that the 2019 global mean temperature change has a 95-percent certainty level and accuracy to within 0.1F degrees.

Today's data doesn't come as a huge surprise, with the World Meteorological Organization (WMO) signalling at the start of last December that 2019 likely marked the end of the warmest decade on record.

Met Office figures have also revealed that for the United Kingdom, the 2010s have been the second warmest of the cardinal decades over the last 100 years of weather records.

The Bureau of Meteorology in Australia have also recently confirmed that 2019 was the warmest and driest year on record in Australia.

The World Meteorological Organization, which based its findings on analysis of leading worldwide datasets, said increases in global temperatures had already had dire consequences, pointing to "retreating ice, record sea levels, increasing ocean heat and acidification, and extreme weather".

Scientists from the National Oceanic and Atmospheric Administration and National Aeronautics and Space Administration said the higher average temperatures are the result of human activities that release greenhouse gases and that the trends of warming show that the effects of global warming and climate change are continuing beyond year-to-year fluctuations in temperature and weather.

"Unfortunately, we expect to see much extreme weather throughout 2020 and the coming decades, fueled by record levels of heat-trapping greenhouse gases in the atmosphere", Taalas said. "And 2020 is starting off with climate impacts of an unimaginable scale", the group said. That's when people began pumping massive volumes of carbon into the atmosphere via fossil fuels, and we know that carbon-containing compounds are potent greenhouse gasses.