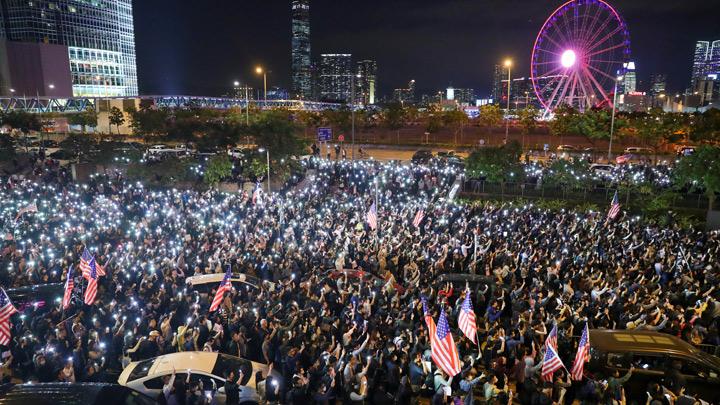 Organisers said that they want to gather support from overseas in their fight, declaring in a statement that "our rally today is to gather everyone in Hong Kong to defend our city as well as advancing worldwide human rights movement with global civil society".

The most popular are a cute pig and a shiba inu dog, who often appear dressed in the movement's ubiquitous yellow tradesman helmets.

For the first time since August, police allowed a rally by the Civil Human Rights Front, a pro-democracy group.

Police warned protesters that "necessary action" would be taken if protesters ignore instructions to disperse, noting that the protesters had gone beyond the end point of the protest route. A Chinese-owned bank was smashed up with broken glass littering the floor and sign was placed outside the bank that says "Love China, hate the party", reported public broadcaster RTHK.

The nearly daily protests have helped drive Hong Kong's economy into recession and taken a heavy toll on retailers, as many shops have been forced to close early amid security concerns and tourists stay away.

Earlier in the day, the unofficial anthem of the movement wafted in the air as people chanted "Five demands, not one less!", referring to the political demands yet unfulfilled which included universal suffrage and an independent investigation into police brutality.

Organisers estimated some 800,000 people snaked for hours through the financial hub's main island as the protests marked six months, a vivid illustration of the hostility that still seethes towards the government after half a year of unrest.

Much was riding on the outcome of this demonstration, the first since pro-establishment parties were badly trounced in district council elections last month.

AmCham chairman Robert Grieves and President Tara Joseph had been travelling to Macau for an annual ball.

Back then they were demonstrating about a law that would have allowed people to be extradited to mainland China. "There is nothing more we can do to change our political system and if we don't come out to fight there will never be an opportunity", said Joe Lai, 30.

"What has been stirred up in society the past few months won't simply fade away if the government refuses to solve the problem of systematic injustice", added Sirius Tam, 21, who donned a giant mask of Pepe the Frog, a cartoon character who has become an irreverent symbol of the protests.

But discontent with Hong Kong's Chief Executive, Carrie Lam, has not disappeared, with many protesters demanding more concessions from her government.

The attacks on the courts were widely condemned by march organisers, police and the government, which it said "undermined Hong Kong's reputation as a city governed by the rule of law". They rolled out emergency measures recently to counter the effects of the turmoil on the economy, including providing electricity subsidies to businesses and expanding job training for young people.

Hundreds of thousands of people poured into Hong Kong's major thoroughfares for an authorised march meant to coincide with the United Nations Human Rights Day. The officers refused to confirm whether the seizures were related to Sunday's rally. "This only conveys the wrong message to violent protesters and misleads them into thinking they have gained the support from other countries or regions".

"If the government thinks that we will give up", said Adam Wong, 23, a university student who was waving a black flag, "today's turnout will prove them delusional".