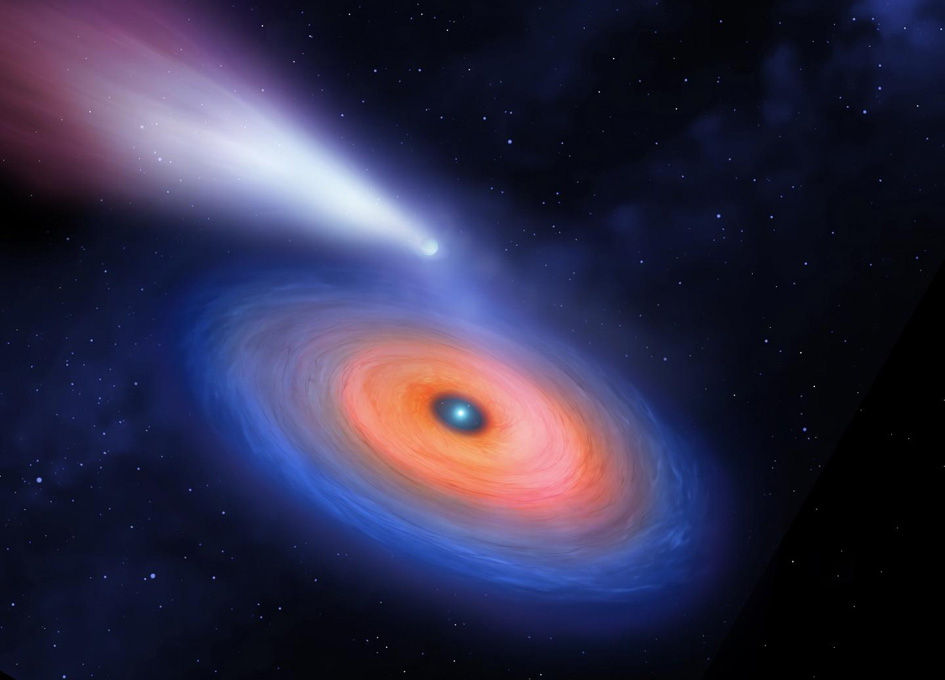 In a far-off system that hints at what our own Solar System might look like in the distant future, astronomers have for the first time observed a Neptune-sized planet orbiting a hot white dwarf, that is so close, it's atmosphere is being stripped away.

"Such a system has never been seen before, and it was immediately clear to me that this was a unique star", lead researcher Boris Gänsicke from the University of Warwick in the United Kingdom said in a release. This pair was first found in a sample of 7,000 white dwarfs taken by the Sloan Digital Sky Survey. Scientists analyzed subtle variations in the light the system emitted to identify the elements present around the star.

"We knew that there had to be something exceptional going on in this system, and speculated that it may be related to some type of planetary remnant", Dr. Gänsicke explained.

To get a better idea of the properties of this unusual star, named WDJ0914+1914, the team analysed it with the X-shooter instrument on ESO's Very Large Telescope in the Chilean Atacama Desert. Using the Very Large Telescope of the European Southern Observatory in Chile to obtain more observations of this star, they found that the shape of the hydrogen, oxygen, and sulphur features are typical indicators of a ring of gas.

"It took a few weeks of very hard thinking to figure out that the only way to make such a disk is the evaporation of a giant planet", said Matthias Schreiber, an astronomer at the University of Valparaiso in Chile, who was vital to determining the past and future evolution of the freakish system. Meanwhile, oxygen and sulfur-in addition to smaller amounts of hydrogen-from the planet fall towards the white dwarf, creating the disk of gas that was detected.

Due to the fact that the massive planet is located at such close distance to the white dwarf, the astronomers say it should have been eaten during the star's explosion phase; unless it moved inward after the star shifted into a white dwarf.

Until now, there has never been evidence of a planet that has survived a star's transition to a white dwarf.

The discovery is potentially groundbreaking as it suggests that there could be many more planets around such stars waiting to be discovered, possibly detectable using the transit method once the Large Synoptic Survey Telescope in Chile becomes operational by 2020. Since it orbits the hot white dwarf at close range, making its way around it in just 10 days, the high-energy photons from the star are gradually blowing away the planet's atmosphere. It is pulling its lost mass into a gas disc around the star at a rate of more than 3,000 tonnes per second. This disc is what gives away the presence of the otherwise hidden Neptune-like planet. "But because the star is so hot, it is evaporating the planet, and we detect the atmosphere it is losing".

The good news here is that there may be a way to see our sun make it all the way to its white dwarf phase, so long as you're able to survive a few billion more years and able to relocate and survive on Jupiter or Saturn. When these stars finish burning their nuclear fuel, they'll first bloat up as enormous red giants, then eventually collapse down into white dwarfs, which pack about one solar mass into a sphere the size of Earth. After that, it'll swell into a red giant, and swallow Mercury, Venus, and probably Earth too. Eventually, there will be nothing left except the tiny core of the white dwarf slowly dimming away. According to the researchers, this is the first time that evidence of a huge planet orbiting such a star has been observed. All evidence points to this planet being a giant. This study puts an end to two decades of speculation that planets exist around white dwarfs, indicating that there could be many more that have yet to be identified, the researchers said. "There was the general agreement that those white dwarfs should have proper planets orbiting them, but none had been found so far". Sometimes stars like this had planetary systems before they died, and sometimes asteroids or even rocky planets can be disrupted by the dead star's fierce gravity.

"But somehow this newly-discovered planet has survived".

Pope: A lot of talk, but little is done about climate change
Already, average temperatures have increased by about 1C, leaving little room for the more ambitious target to be met. The Climate Summit, which should lay the bases for a new phase of climate action, starts today in Madrid . 12/05/2019

Priyanka Chopra receives Danny Kaye Humanitarian Award
PeeCee sent a strong message at the event by stating that giving back should be a "way of life" and not a "choice". Tagging her mum, the desi girl went on to write, "Mom this is what you have inculcated in me from the beginning. 12/05/2019

Phil Spencer Has Already Taken an Xbox Project Scarlett Home With Him
The first is Project Anaconda , which is the machine that's described above and can be thought of as a traditional gaming console. If Microsoft's going to skimp on the details, it might as well do so in a way that puts its best foot forward for now. 12/05/2019

Unnao: India rape victim set on fire on way to case hearing
The survivor had been gangraped in March and was on her way to pursue the case against the accused when she was attacked. From there, she was sent to the district hospital before being referred to Lucknow , police said. 12/05/2019

Liverpool name 23 man World Club Cup squad
Neil Critchley will manage the Liverpool side that faces Aston Villa in the League Cup quarer-final at Villa Park on December 17. It's likely that Kelleher - as he was done so far this season - will start for Liverpool in the League Cup game. 12/05/2019

The Irishman launches into Oscar race with National Board of Review win
Supporting awards were given to Brad Pitt for Once Upon A Time in Hollywood and Kathy Bates for Clint Eastwood's Richard Jewell . The winners of the NRB awards will now be announced, and the awards will be distributed at a ceremony in January. 12/05/2019

LeBron James gets away with ‘worst’ travel, then celebrates in socks
The Lakers improved to an NBA-best 19-3 and with a comfortable lead late in the fourth quarter, James went to the bench. LeBron James got away with one of the worst travels in National Basketball Association history, and he knows it. 12/05/2019

Two-faced? Canada's Trudeau plays down spat with Trump
The leaders of NATO's 29 countries are gathering in London this week to honor the 70th anniversary of the military alliance. While the bad blood may lead some to think this will inevitably turn into a political fallout, one expert doesn't think so. 12/05/2019

Here's how to get your Spotify Wrapped 2019-and My Decade Wrapped
When it comes to the entire decade, the most streamed artists were - perhaps unsurprisingly - Drake, Ed Sheeran and Post Malone. While this year's campaign will hold true to that sentiment, Spotify is turning it up and closing the decade at full volume. 12/05/2019

Ford Cars Get A Jolt Of Sustainability With A New Coffee Innovation
McDonald's is on its way to sourcing 100 percent of its guest packaging from renewable, recycled or certified sources by 2025. Next, the company is considering what other waste products from McDonald's could potentially be given a second life. 12/05/2019

Unvaccinated families told to hang red flag on door
But efforts so far have failed to stop infection spreading, prompting this week's drastic escalation in the immunization campaign. For weeks, Samoa has been battling the deepening measles crisis, which has claimed over 60 lives and infected thousands more. 12/05/2019

Arsene Wenger 'Happy to Help' Interim Arsenal Boss Freddie Ljungberg if Required
Download the Score Centre app for iOS devices orAndroid, select "Notifications" from the "More" section in the app main menu, then toggle on for "Goals" to get alerts straight to your phone. 12/05/2019

New Amazon Music documentary declares: 'Mariah Carey is Christmas!'
And on Thanksgiving this year, " All I Want for Christmas is You " by Mariah Carey hit No. 1 on Amazon Music's overall top streamed songs chart in the U.S. and globally. 12/05/2019

Govt taking steps to control onion prices: Sitharaman
Onions are being sold for Rs 100 per kg in many parts of India, while the price for one kg of garlic had shot up to Rs 600. To this, she said, "I don't eat much onion or garlic". 12/05/2019