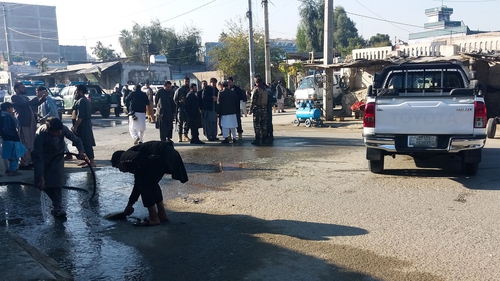 Nakamura died while being transported from a hospital in Jalalabad to the U.S. Bagram Airfield base, north of the country's capital Kabul, to receive further treatment, according to a Nangarhar official.

He took charge of a Japanese charity - Peace Medical Service - in 2008 after the abduction and subsequent killing of his countrymen, Kazuya Ito.

On Nov. 24, a United Nations staff member from the US was killed and two others were wounded when a blast targeted their vehicle in Kabul.

It was "a senseless act of violence against a man who dedicated much of his life to helping" Afghanistan's most vulnerable, UNAMA said.

"Sadly, Dr Nakamura has passed away from the wounds he received in the armed attack this morning", said Attaullah Khogyani, a spokesman for Nangarhar's governor.

Officials said Tetsu Nakamura, 73, was attacked while riding an aid vehicle in the eastern Afghan city of Jalalabad.

Nakamura was famous in Japan for his aid work, which dates back decades.

Nakamura had worked in the region since 1984, initially providing aid in Peshawar, in north-west Pakistan, before opening a clinic in Afghanistan in 1991.

"I am not fooled by the justification that violence is necessary for the sake of democracy and modernisation", he wrote in an old posting on his website.

He also said, "There is no way" that the aid group will abandon the irrigation improvement project in Afghanistan to which Nakamura had long devoted himself to fight malnutrition, a problem he found to be the root cause of illness in the region. "Then the gunmen left the area through a small street".

The Taliban, who along with the Islamic State group, operate across the province, denied involvement in the attack.

Authorities recently claimed the militants have been territorially defeated in the province - but small cells are thought to remain.

Armed attacks against global aid groups and agencies of foreign governments are part and parcel of life in the country that has not known political stability for decades.

Also in the capital, the Taliban in May targeted Counterpart International, a US-funded non-profit group working with marginalised people.

The Taliban control or hold sway over almost half of Afghanistan, staging near-daily attacks that target Afghan forces and government officials but also kill scores of civilians.