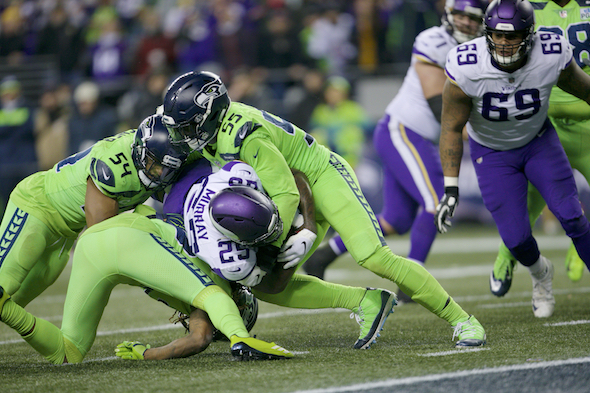 That's good news for the Seahawks.

We've been here before, a pivotal game in December featuring the Seahawks and Vikings on a Monday night.

After their first 11 games of the 2019 season, the Minnesota Vikings are sitting with an 8-3 record and they are one of the top teams in the NFC.

The loss dropped San Francisco to 10-2 on the season. The team that they will be facing on Monday, though, is quite different than the Broncos.

According to insider information from the NFL, Tom Pelissero, the Vikings have ruled out Thielen for Monday night's inclination at CenturyLink Field. The team will also hit the Seahawks with a heavy dose of Dalvin Cook. In fact, if they don't beat the Vikings, not only would they stay a game behind the 49ers for the NFC West lead, but they would be in the sixth and final seed to the playoffs out of the conference.

The Vikings are now 8-3 and in a dog race for the NFC North title.

Since the NFC West seems out of reach with five games to go, the best chance for the Los Angeles Rams to secure a spot in the playoffs will be through one of the Wild Card spots in the NFC. Luckily for Seattle, Jadeveon Clowney is back with the defense against the Vikings by Tom Pelissero.