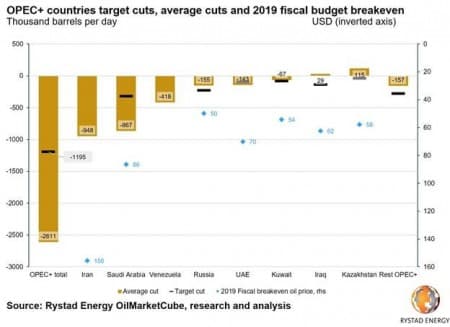 -China trade agreement might have to wait until after next November's presidential election, denting hopes of a quick resolution to a dispute that has weighed on the world economy.

American benchmark West Texas Intermediate (WTI) was trading at $56.16 a barrel at the same time for a 0.2% increase after it ended the previous session at $56.03 per barrel.

The Organization of the Petroleum Exporting Countries (OPEC) and allies including Russian Federation, known as OPEC+, are expected to at least extend existing output cuts to June 2020 when they meet this week.

OPEC and other major oil producers are expected to agree to deepen output cuts to 1.5 million barrels per day (bpd) to the end of 2020 from 1.2 million now to help reduce a global supply overhang, JPMorgan said in a note on Tuesday.

Also, the Saudi government is on the verge of putting out a strategy into the market to woo investors before the initial public offering of its oil company, Saudi Aramco.

"(The) oil price is little moved today, suggesting that traders are skeptical about the additional 400,000 BPD cut on top of the extension of (the) current production cut agreement", said Margaret Yang, market analyst at CMC Markets in Singapore. Iraq said on Sunday that Opec+ may consider deepening output cuts, contrary to expectations, while Saudi Arabia has signaled it will no longer tolerate cheating by other members on quotas.

More news: Playing the Sound of a Healthy Reef Could Help Save Corals

The U.S. oil producer companies remained unperturbed due to the continuous increase in production with the hope to meet up with shortfalls as the global oil regulator is due to announce possible cuts in supply this week.

Furthermore, the volatility of oil prices can be traced to the lingering trade agreement between the USA and China, causing growing trade tension globally.