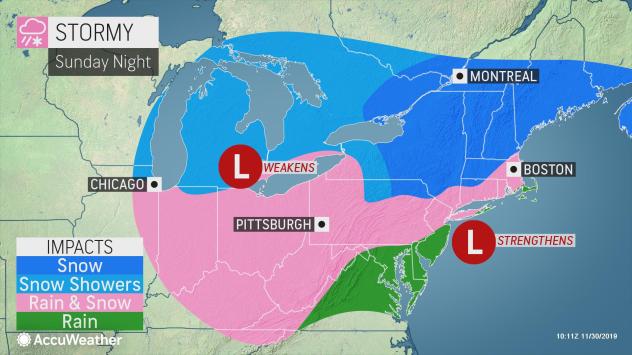 Authorities found the bodies of two young children in central Arizona after a vehicle was swept away while attempting to cross a runoff-swollen creek. In South Dakota, nine people were killed and three injured when a small plane crashed while the area was under a winter storm watch.

The National Weather Service in Wyoming reported 4 inches (10 centimeters) of snow fell in Cheyenne from 7 p.m. Friday through 10 a.m. Saturday "that has been blown all over kingdom come by our winds", said meteorologist Andrew Lyons.

Blizzard conditions are already impacting the High Plains and around Duluth, Minnesota, on the shores of Lake Superior.

The Duluth Transit Authority announced early Sunday that it was canceling bus service for the day because of the poor road conditions. Around 2 to 3 feet of snow is forecast, with higher amounts possible in localized areas. Another system is forecast to develop in the mid-Atlantic Sunday, moving into a nor'easter by Monday.

New York City could much as 4 inches of snow by Monday, starting early Sunday as flakes, then turning to sleet and later to rain by afternoon and becoming a mix of rain and snow on Monday with light to moderate snowfall by Monday night.

Airlines at O'Hare International and Midway International airports in Chicago reported average delays of 15 minutes as a winter storm headed toward the Midwest with heavy snow and ice and gusty winds.

"Troopers are ready to assist residents and motorists across the state both on and off of the highways throughout this busy travel weekend", State Police Superintendent, Colonel Patrick Callahan said, who also said the state emergency operations center would be open as of noontime Sunday, in constant contact with emergency coordinators in all 21 counties. This year, AAA estimated a near-record 55 million people hit the road, rails and skies for the holiday travel period it defines as the five days from Wednesday to Sunday. "Everybody thinks the day before Thanksgiving is the busiest; it is not". Wind gusts could reach up to 45 miles per hour along the coast, with Cape Ann and outer Cape Cod suffering the worst of the bluster.

Families in California took advantage of the early season snow in the Grapevine area, sledding down slopes in Frazier Park, California.

A plow clears snow on Interstate 70 in the foothills west of Denver.

Back-to-back snowstorms and strong winds have combined to make travel hard to impossible across much of Wyoming as wintry causes serious complications for post-Thanksgiving holiday travel while a powerful storm moves east toward the Midwest. Steuben could see a little less snow than that, but a little more ice.

That was added to a foot of snow that fell before Thanksgiving.

Rain will stretch from coastal areas in the Northeast to farther south where it will be accompanied by thunderstorms and strong wind gusts, the weather service said.

To the west, the Minnesota Department of Transportation closed a stretch of Interstate 35 between Duluth and Cloquet overnight through late Sunday morning; traffic is moving again but driving conditions are hard.

At least 14 dead in Mexico gunbattle near Texas border
Coahuila has a history of gang violence, though the homicide total in the state is well below where it was seven years ago. A series of recent security lapses has raised questions about the left-leaning administration's strategy. 12/02/2019

Inter leapfrogs Juventus to top Serie A as Bianconeri draw
The Italy forward has scored 17 league goals this season, seven more than Inter's Romelu Lukaku, who is second in the standings. The Portuguese football coach lent his support to his compatriot, claiming both him and Lionel Messi to be "extraterrestrial". 12/01/2019