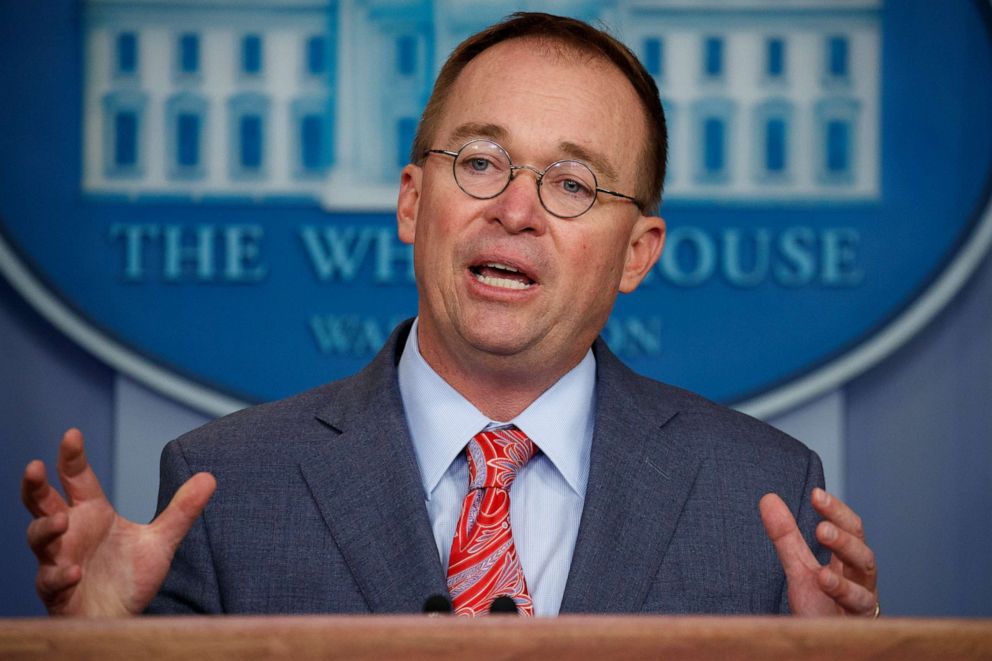 Per the Post, U.S. District Judge Richard Leon called for a conference call with the lawyers for Kupperman, Mulvaney and Bolton Monday afternoon to decide how to proceed.

Allies of former NSA John Bolton were shocked and dismayed when they learned that acting White House Chief of Staff Mick Mulvaney is trying to join a lawsuit filed by a former Bolton deputy Charles Kupperman to gauge if he has to comply with a House subpoena.

The House committees conducting the inquiry opted not to subpoena Bolton after his attorney threatened to fight such a move in court, according to a committee official, and, unsurprisingly, the former national security adviser was a no-show Thursday.

Like Kupperman, Mulvaney has defied a subpoena from impeachment investigators.

In a court filing Monday, Kupperman's attorney, Charles Cooper, said Mulvaney should not be allowed to join the lawsuit.

Cooper also argued that Kupperman's role as an adviser exclusively on "highly sensitive" national security matters differs from Mulvaney, who advises the president on a range of subjects. The House asked the judge to dismiss Kupperman's case on Wednesday after they withdrew their subpoena for Kupperman's testimony, arguing that the case was obsolete without the subpoena.

On Saturday, Mulvaney's attorney William Pittard filed a motion requesting to join the suit, arguing the two officials were in similar circumstances, since both had received subpoenas and were told not to comply by the White House. The attorney said there is a "serious question" as to whether Mulvaney waived the immunity protection with his public comments. Mulvaney also seeks different relief than Kupperman, of voiding a House subpoena, and names additional defendants, Letter wrote.

"The Court should reject such gamesmanship and deny Mulvaney's motion", Letter said, particularly because as White House chief of staff, Mulvaney "likely played a role in the decision" to assert absolute immunity for himself.

The case is the latest twist in White House efforts to block all former and current administration officials from testifying or otherwise cooperating with the Democrat-led probe.

"President Trump, represented by the Department of Justice, will vigorously champion Mulvaney's interest in the President's assertion of absolute immunity overriding Mulvaney's obligation to appear and testify in response to the House subpoena", Cooper wrote.

Judge dismisses Trump suit over NY tax returns
Trump is also engaged in a legal battle with NY officials, who subpoenaed eight years of his personal and business tax returns. Such a decision now could rest with a judge in NY , if Trump's lawyers refile their claim in federal court there. 11/12/2019

FIRST ALERT FORECAST: Rain likely tonight; bitterly cold Tuesday and Wednesday
While an area of low pressure will generate snow for the Monday morning commute, it's not likely to be much initially. But in areas with the most persistent lake effect snow bands, 14 to 20 inches of snow is not out of the question. 11/12/2019

SpaceX launches 60 mini satellites in quest for global internet coverage
SpaceX has demonstrated speeds of 610 megabits per second using Starlink satellites with the US military. The company's Block 5 Falcon 9 rockets are designed for 10 flights of the first stage. 11/12/2019

Prince Harry, Meghan Markle Reunite With Prince William, Kate Middleton
Fans of the designer praised the elegant style of Meghan's outfit as well as the design of the coat. The Countess of Wessex, the Duchess of Sussex and Sir Timothy Laurence on Remembrance Sunday. 11/12/2019

Trump Responds to Potential Bloomberg 2020 Run: ‘Little Michael Will Fail’
Candidates like Warren and others have decried self-funding campaigns and run hard against the impact that money has in politics. The presence of the former NY mayor and multi-billionaire would set alight the race for the Democratic Party nomination. 11/11/2019

Tanaji Poster Released, SRK Applauds
Alongside Ajay's Tanhaji poster, SRK wrote, "Here's looking forward to another 100 and more films from my friend @ ajaydevgn ". The photo seems to be a creative collection of several very small photos which together give the impression of Ajayn Devgn. 11/11/2019

China's Jingye Group in talks to buy British Steel
British Steel has rescued by Chinese firm Jingye potentially saving up to 4,000 jobs, the Insolvency Service has said. The deal could be announced by the Official Receiver as early as Monday. 11/11/2019

Bushfires in Australia: Firefighters battle more than 100 bushfires in Australia
Emergency services have warned of a " catastrophic threat" as raging wildfires and worsening weather conditions head for Sydney. According to reports, the show's producers are monitoring the situation closely with the blazes close to the celebrity camp. 11/11/2019

I’m A Celebrity 2019: How long is I’m A Celebrity on for?
Jenner was seen at Brisbane airport an hour after Wright was seen at the arrival terminal, but he denied that he was in the cast. It has also been reported that Kate Garraway, Myles Stephenson, Nadine Coyle and Roman Kemp will be taking part in the ITV show. 11/11/2019

United Kingdom narrowly avoids sliding into recession despite weakest annual growth since 2010
Tej Parikh, economist at the Institute of Directors, said: "Narrowly avoiding a recession is nothing to celebrate". Business investment held steady in the third quarter but dropped by 0.6 per cent on the year, the ONS said. 11/11/2019