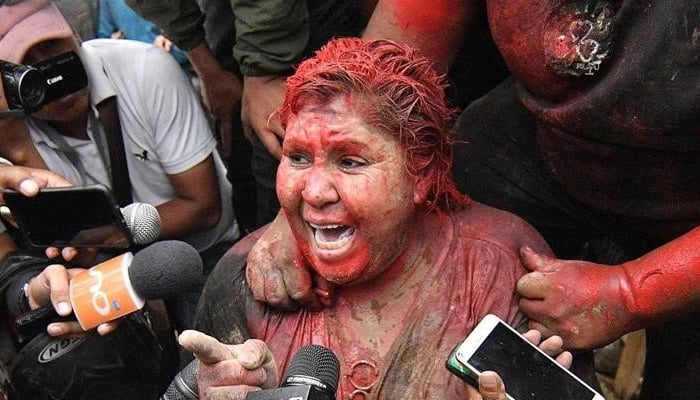 Protesters accused Mayor Arce of supporting the President by bus in an attempt to break the blockade they set and accused her of causing death, which was later confirmed.

Mayor Patricia Arce Guzman, the mayor of Vinto, was confronted by protestors at the town hall.

Masked protesters called Arce a murderer and dragged her for almost five kilometres before they cut off her hair and doused her with paint, local newspaper Los Tiempos reports.

Amid shouts of "murderess, murderess" masked men dragged her by the streets barefoot to the bridge.

Mr Morales is from the Movement for Socialism (MAS) political party, the same party Ms Arce belongs to.

The mayor of a small town in Bolivia has become the latest victim of violence in the country that has seen violent street clashes intensifying over the country's disputed election almost three weeks ago.

A 20-year-old student died Wednesday in clashes between pro and anti-government protesters in the central city of Cochabamba, with a total of three dead since the October 20 elections.

The mayor of the Bolivian town of Vinto, near Cochabamba, was assaulted and humiliated by a mob of angry protesters who blame her for the death of two protesters in neighboring Cochabamba, The Daily Mail reported.

She was dragged and forced to walk barefoot through the town by the mob, before being rescued by police on motorcycles. When final results were declared, Morales had a 10-percentage-point lead over Mesa, just enough to win outright in the first round of the presidential election.

The protestors also forced Guzman to kneel as the protestors cut her hair, doused her in red paint, and forced her to sign a resignation letter.

"All my solidarity with our sister, mayor of Vinto, Patricia Arce, who was cruelly harassed for expressing and defending her ideals and the principles of the poorest", he tweeted in Spanish.

"For these people, being a woman is a crime, being humble is a crime, having a skirt is a crime", Vice-President Alvaro Garcia said.

She said that she will not stop talking regardless of the risk of losing her life. He named the events that are circulating in the country as a "fascist wave". They had expressed their dismay and extreme hatred for the insults of racism, hatred, violence, and discrimination shown by the opposition groups.
Share: