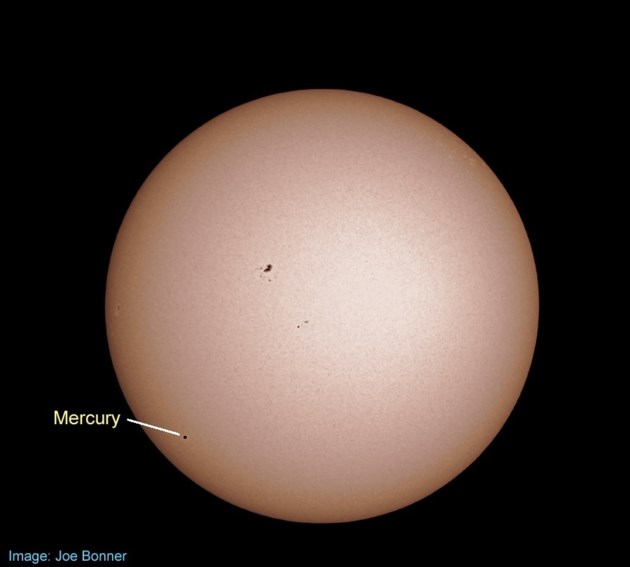 The Scientific and Technological Research Council of Turkey (TUBITAK), will organize a special event on November 11 to observe a rare transit of the planet Mercury across the face of the Sun, the council said in a written statement on Thursday. This rare planetary event will commence at 4:35 am and end at 10:04 am. According to NASA, spectators need to see binoculars or telescope with a Sun filter to witness the phenomenon as Mercury is so small from our perspective on Earth.

The transit of Mercury isn't like a solar eclipse. This is the first that will soon be illustrated. Note that the diameter of Mercury is 195 times smaller than that of the Sun.

Did not this just take place?

Have you ever observed Mercury through a telescope before?

"Mercury passes in front of the sun approximately a dozen times each century, but the November 11 event will be the last one visible from North America until 2049", said Mike Brake, Oklahoma City Astronomy Club member.

The rarity of this phenomenon is simply explained. Even though Mercury takes only 88 days to orbit around the sun (its sidereal period), duration between inferior conjunctions is 118 days (its synodic period) as the Earth, too, is orbiting around the sun. "We'll see the entire transit from start to finish".

Anyone who wants to take part in a viewing should know that this is the last chance to see this unbelievable celestial event until it happens next in 2032.

During this event, the UVI mobile planetarium will be set up at the UVI library, and physics faculty and students will be on hand to discuss the nature of planetary transits and how such events are related to the search for planets around stars outside the Solar System. It should arrive on the spot in 2025. Her domain is technology and covers the same from last five years. she is a gadget freak and loves to experiment and try new things. she is a person who loves to provide a solution to problems be it professional or advice on personal life.

There are two locations in Saskatoon where people can view the transit: Riverlanding west of the Traffic Bridge and the University of Saskatchewan Observatory.