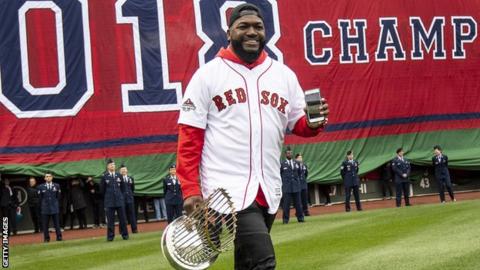 Former Boston Red Sox star David "Big Papi" Ortiz was shot Sunday night in the Dominican Republic, and remains in intensive care after a bullet went into his back and out his stomach, according to CNN.

The wife of Boston Red Sox legend David Ortiz has released a new statement as her husband continues to recover from a gunshot wound.

"On behalf of me and my family, I want to thank John and Linda Henry, Tom Werner, Sam Kennedy and the Boston Red Sox for all that they are doing for David and our family, as well as Dr. Larry Ronan and the awesome staff at Massachusetts General Hospital", Tiffany Ortiz said.

The Red Sox arranged to fly him to Boston following an initial surgery in the Dominican Republic to fix damage to his organs.

Jhoel López, a TV host in the Dominican Republic, was speaking to Ortiz at the bar when the shooting broke out and was also injured, according to The Associated Press.

Although initial reports suggested that Ortiz was shot during a robbery, police no longer believe that to be the case. He led the Red Sox to three World Series championships, was a 10-time All-Star and hit 541 home runs.

Fans at walk past a photograph of Boston Red Sox's David Ortiz before a baseball game at Fenway Park in Boston, Oct. 1, 2016.

Dr. Abel Gonzalez, who performed the surgery, said part of Ortiz's intestines and liver were removed.

The incident occurred just before 9:00 p.m. local time on Sunday at the Dial Bar and Lounge in Santo Domingo.

One suspect, 25-year-old Eddy Feliz Garcia, entered police custody after a crowd beat and injured him following the shooting. Two others were also wounded during the attack.

Investigators are trying to determine whether Ortiz was the intended target, Bautista said. "I'd be hard-pressed to think of anyone more beloved than David". The Red Sox retired his number the following year. Ortiz maintains a home in Weston, on the outskirts of Boston.

"So far, so good", Cora said here at Fenway Park on Tuesday.