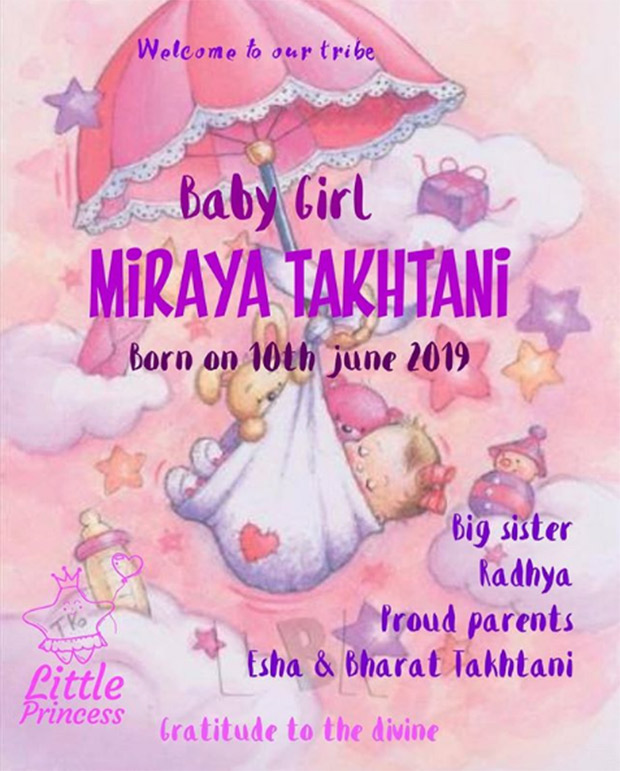 Mumbai: Actress Esha Deol and her husband Bharat Takhtani have welcomed their second bundle of joy, a daughter and have named her Miraya Takhtani. Esha took to her Instagram page to share this happy news with her fans and followers.

Looks like, the cute couple has completed their family filled with two cute baby girls.

"Welcome to our tribe Miraya Takhtani". The lovely couple's firstborn is also a girl born in the year 2017.

Esha captioned the photo, "Thank you very much for the love & blessings @bharattakhtani3 #radhyatakhtani #mirayatakhtani". "Gratitude to the divine". Just like her first pregnancy, Esha Deol announced her second pregnancy on social media. Recently, Esha Deol shared a picture of herself with Radhya from the latter's dance recital at her school.

Esha, who is the daughter of veteran actor Dharmendra and politician Hema Malni, married Bharat in June 2012. Lara Bhupathi wrote, "Heartiest congratulations @imeshadeol and Bharat on the arrival of your angel!"