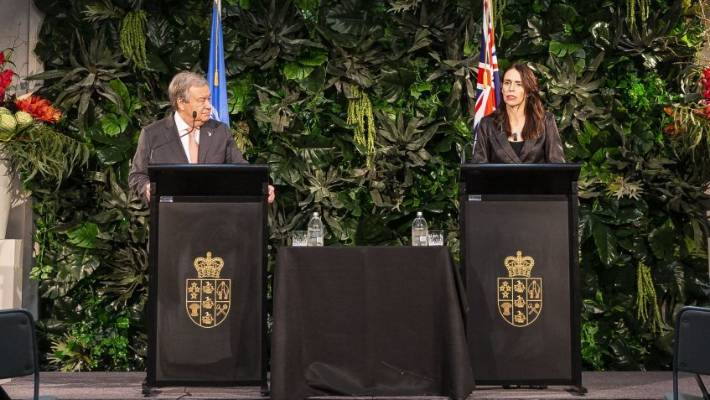 The United Nations secretary-general Antonio Guterres has warned the world is "not on track" to meet its climate change commitments kicking off a historic trip throughout the Pacific meant to focus on the looming threat of climate change.

Guterres, on a three-day visit to New Zealand, met with Prime Minister Jacinda Ardern, who will attend a Paris summit next week calling for eliminating terrorist and violent extremist content on social media.

However, he said that political will has been fading in other countries, even though they are conscious of the need to act, which is one of the reasons for launching a special UN Climate Summit to be held at UN Headquarters in NY in September.

Acknowledging the role that youth needs to play in advancing climate action worldwide, he reminded the room of our common "central objective: not to have more than 1.5 degrees of increasing temperature at the end of the century".

"The paradox is that as things are getting worse on the ground, political will seems to be fading."

"This is an example of the greater ambition we need if we are to keep pace in meeting the climate threat".

In a strong message for action on climate change, Mr Guterres said worldwide political resolve was fading and it was the small island nations that were "really in the front line" and would suffer most. The bill is expected to come to a final vote in Parliament later this year.

Mr Guterres also expressed his solidarity with the victims and families.

He said he admired the solidarity New Zealand showed after the attack, and praised Ardern for helping implement new gun control laws and for urging other world leaders and tech companies to find a way to prevent acts of extremism from being shown online, after the gunman livestreamed his attack on Facebook.

He will also visit Fiji, Tuvalu and Vanuatu during his visit, and meet leaders and senior government officials from the Pacific Islands Forum. The secretary-general's trip comes ahead of the Climate Action Summit that he plans to convene in September in NY.