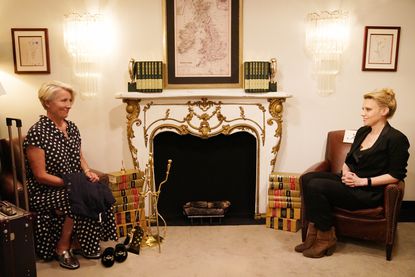 'Well, if you don't already know that, that's kind of on you Chuck, ' said Bennett's McConnell.

As the sketch proceeds, Mooney's Todd runs through a variety of hypothetical scenarios to determine whether the Republican senators would abandon the president, and on each occasion they ultimately stick by his side.

Mooney's Todd pointed out this appeared to be a "complete 180 on the president", after previously calling Trump a "jacka- during the campaign". "Unless he can help me and then it's, 'new Lindsey, who's this?'"

"The best way to uphold the law is to be above it", replied the skit's Graham.

'I'd have to write a strongly worded email and send it straight to my draft folder, ' she said.

"I can think of another great man who was Jewish", Bennett's McConnell said, quickly following it up with "Jesus Christ" at the same time Strong's Collins said, "Sammy Davis Jr".

The questions and answers grew increasingly more weird: Would they support Trump if he were a "Louis Farrakhan"-style Muslim? Yes".

In the end, the fake Republicans double down on their support for Trump. Married Rep. Alexandria Ocasio-Cortez? "What would you say then?"

"Well I would show up to the wedding but not before I mumbled a strong rebuke", Strong's Collins said.

Todd asked if the three would mild make stronger the president if he modified into out to be Muslim.

"And they had matching diapers fashioned out of the original constitution", Collins chimed in.

Todd then quizzes the senators about what, if anything, Trump could do to make them drop their support. "We'll always be ride or die, bitches".