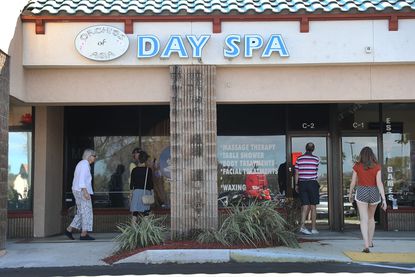 A judge has granted Robert Kraft's motion to suppress video evidence in his solicitation of prostitution case, according to multiple reports.

Also last month, Hanser temporarily blocked prosecutors from releasing the video footage to media outlets, which had requested copies under the state's open records law. Kraft pleaded not guilty to two misdemeanor charges and rejected a plea deal in favor of a jury trial. ESPN's T.J. Quinn believes the judge's ruling torpedoes the case against Kraft.

Hanser said the Jupiter Police Department and the judge who issued the search warrant did not do enough to minimize the invasion of privacy of customers who received legitimate massages. Prosecutors did not immediately respond to emails seeking comment, but they are likely to appeal.

Kraft's lawyers challenged the validity of the search warrant that let authorities install hidden cameras inside the spa, and argued that the warrant violated Kraft's Fourth Amendment rights and Florida law.

Kraft was one of nearly 300 men who were charged in February with paying for sex acts following police busts at 10 massage parlors that stretched from the Palm Beach area to Orlando.

Kraft was among 25 men charged in February with soliciting prostitution at the spa in Jupiter, Fla.

Hanser already had ruled the Kraft videos can not be released publicly until his trial is underway or the case is settled or dismissed.

Of the two times Kraft was said to have visited the spa was the same day as the AFC Championship between the New England Patriots and Kansas City Chiefs. His team then won the Super Bowl in Atlanta, the Patriots' sixth National Football League championship under his ownership.

Hanser has ordered Kraft to appear in court for a May 21 pretrial hearing.