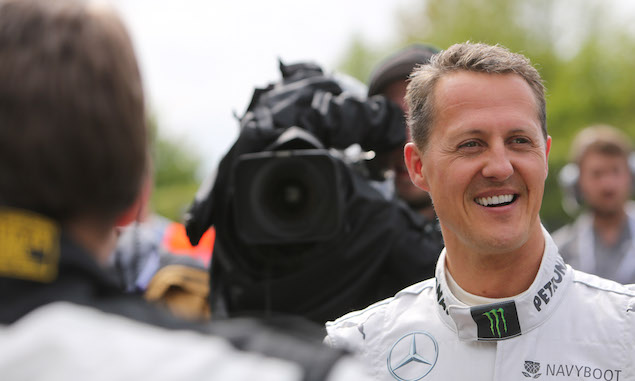 Schumacher turned 50 on January 3 but has not been seen in public since a skiing accident in the French Alps five years ago which left him with severe head injuries and in a medically-induced coma.

New film "Schumacher" - which is officially endorsed by the seven-time world champion's family - will be released in cinemas in Germany and Switzerland in December this year. Rocket Science is executive producing and handling global sales, starting at Cannes.

Producers said of the feature length film: "The film portrays not just an incomparable career, but also the many facets of a complex man".

The highlights of his F1 career, his sporting highs and lows, will be as much a part of this story as previously unseen archive material, which illuminates the uncompromising driver, ambitious boy, pragmatic mechanic and team player as well as the family man.

'It's time for this film.

Scenes from Schumacher's 50th birthday celebrations in January are expected to be included in the film, which will also celebrate the 25th anniversary of his first World Championship success, when he raced to victory over his main rival Damon Hill in Adelaide, Australia, after the two crashed spectacularly. But of course we're very aware of the responsibility that comes with it'.

B14 Film's Benjamin Seikel, who are making the film, said: "We're very happy about the trust Michael Schumacher's family and management have shown us".

But after retiring from the sport, Schuey suffered a near fatal skiing accident at Meribel resort in 2013.

The racing legend, who was last seen in public in 2013, is being well-cared for at home in Switzerland.

It will offer fans an up-close glimpse into the private battles of the Ferrari's legends family who, until recently, kept Michael's condition and progress a closely guarded secret from the media.

"Please understand if we are following Michael's wishes and keeping such a sensitive subject as health, as it has always been, in privacy".

Schumacher won his first championship in 1994 with Benetton before retaining his title in the ensuing campaign.

He returned to the grid with Mercedes in 2009 but endured a largely disappointing three-season spell.

A film that seeks explanations and provides answers without glossing over things, the name Michael Schumacher still electrifies people all over the world.

Gilead to donate HIV drug to United States government
HHS officials said the donation came about "as a result of discussions between the Trump administration and Gilead ". The drug, despite being manufactured at a relatively low price, can cost a user up to $2,000 for one month's supply. 5/13/2019

565 civilians killed in de-escalation zone since Sept
The so-called Syrian Observatory for Human Rights said militants had withdrawn after being almost encircled by the army. Al-Qaida-linked Hayat Tahrir al-Sham is the main insurgent group in the area. 5/13/2019

Pakistan To Get $6 Billion From IMF Over Next Three Years
As part of the agreement , Pakistan is expected to receive $ 6 billion in assistance over the next three years. The funding, which still needs approval from the IMF's management, would be provided over three years. 5/13/2019

ISIL claims 'province' in India, officials call it 'propaganda'
A spokesman for India's home ministry, which is responsible for security in Kashmir, did not respond to a request for comment. The military official said it was possible that Sofi was the only fighter left in Kashmir associated with ISIL. 5/13/2019