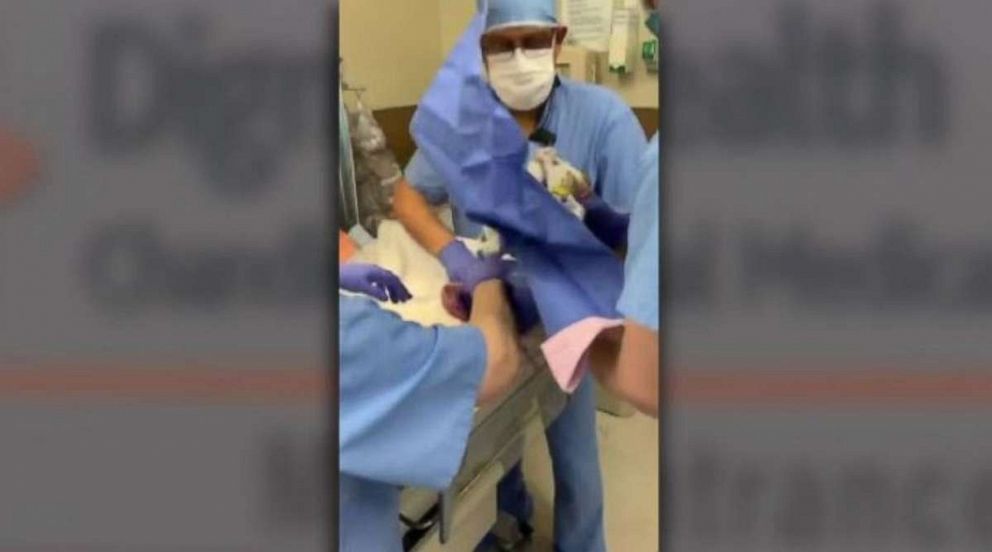 The video, shot by her husband in the delivery room, shows tiny Morgan being dropped by a hospital staffer a short distance onto a bassinet, reports the Arizona Republic.

In less than 24 hours, the video has been shared more than 100,000 times and viewed well over one million.

Baby Morgan is saved by another staffer, who snatches her from mid-air after the doctor loses his grip on the child.

The video is a little hard to watch.

In an interview Rodgers said, "I told him (the hospital employee), you dropped my baby". "I did see the video and it was pretty disturbing", he said. 'He had like a nonchalant look on his face.

The Rodgers told Fox 10 they did not get the results of the test until six weeks later.

Almost three months later, the mother says Morgan has begun exhibiting behaviors that she believes are not normal.

The couple says the hospital has not apologized and they want to know if the baby's fall is the cause of a small head injury revealed in an ultrasound. Apparently, an ultrasound had been ordered for the girl five days after her birth because of her low birth weight, but the results showed that Morgan had a grade 1 brain hemorrhage - something neither parent had been made aware of.

Monique said she had no idea testing was done at all.

According to KNXV, the parents, Derrick and Monique Rodgers, are speaking out and want an apology from the hospital.

Derrick and Monique admit, aside from being small, Morgan is doing well.

But, the parents say Morgan shakes at times, which has them questioning things.

"You know, an apology when it happened could've gone a long way", said Monique.

"Because of patient privacy laws and a request from the family not to release information, we are unable to comment specifically on this matter", Chandler Regional Medical Center said in a statement to KNXV.

Upper House reaffirms strong commitment to press freedom
It is the cornerstone for building fair and impartial institutions, holding leaders accountable and speaking truth to power. 5/05/2019

Malaysia frees Vietnamese woman accused of poisoning North Korean leader’s half-brother
Malaysian officials never officially accused North Korea of involvement and made it clear they didn't want the trial politicized. The 30-year-old was sentenced to 40 months in prison from the day of her arrest and was released early for good behaviour. 5/05/2019

Chewbacca tribute: Euronews pays respects to Star Wars actor Peter Mayhew
Survived by three children and his partner, Angie, Mayhew was born in Surrey, England, but passed away in the Texan town of Boyd. Actors from the Star Wars franchise including Mark Hamill and Billy Dee Williams have posted their tributes on Instagram . 5/05/2019

Hubble creates stunning mosaic containing roughly 265,000 galaxies
Bacon (STScI). "No image will surpass this one until future space telescopes like James Webb are launched." . The Hubble telescope has captured a dazzling new photograph of a spiral galaxy , NGC 2903. 5/05/2019

The Razer Toaster is actually happening
Let's see when Razer will come up with its Razer Toaster and what will be special in this as compared to the normal Toaster . In 2016, under April Fool's Day prank the company teased slice of toast with a Razer logo embedded on it with an LED light. 5/05/2019

USA and Australia drive PPB revenue growth in Q1
This comprised £366m in sports revenue, up 15% year-on-year, and revenue of £113m from gaming, a 26% increase. CEO Peter Jackson said that the company's trading in April has been in line with the company's expectations. 5/05/2019

Salah stretchered off after clash of head with Newcastle's Dubravka
Divock Origi replaced Salah on the field for Liverpool and went on to score the game-winning goal in the 86th minute. When I am sitting here just remembering what we have done, I will resign immediately. 5/05/2019

Israel marks Holocaust Remembrance Day
This year Prime Minister Benjamin Netanyahu opened the solemn occasion with a speech concerning the recent rise in anti-Semitism. At the same ceremony, Israeli President Reuven Rivlin cautioned that Europe was seeing the "reemergence of ghosts of the past". 5/05/2019

Borderlands 3, New Images and Details from the Reveal of Gearbox Software
They're only cosmetic items, which is something a lot of games are doing nowadays, thankfully. What do you make of the situation? 5/05/2019

Rahul takes offence to videogame jibe, hits back saying Modi insulted Army
Gandhi also alleged that the Election Commission was "completely biased" towards the Opposition. Who Sent Azhar Back to Pakistan? Gandhi said terrorism has to be dealt with sternly. 5/05/2019

Cruise ship quarantined over measles case returns to Curacao
Lucia's Ministry of Health and Wellness said on Thursday it had provided 100 doses of measles vaccine to people on the ship. Health inspectors reportedly boarded a cruise ship in Curaçao Saturday to investigate a case of the measles. 5/05/2019

Airbus sees Bombardier's Belfast plant as 'key supplier'
Bombardier said it would look for a buyer that would "operate responsibly and help us achieve our full growth potential". The company employs about 3,600 people in plane-making activities at a number of sites in and around Belfast. 5/05/2019