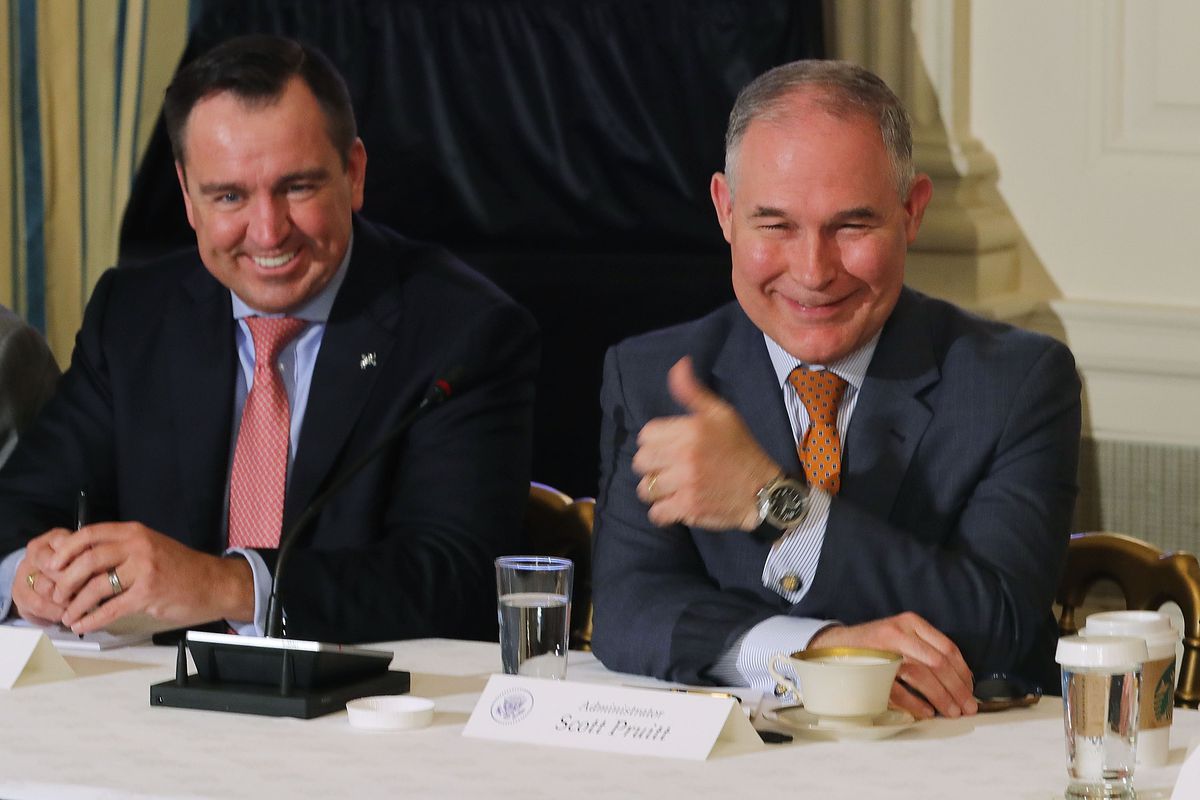 "Unfortunately. we've had some incidents on travel dating back to when I first started serving in the March-April timeframe", he told the newspaper.

Environmental Protection Agency Administrator Scott Pruitt frequently flies in first and business class because he's regularly confronted by angry members of the public during his travels, according to a report in Politico on Thursday.

He says he wasn't involved in the decision to put him in first class when he travels, which he says was made after some unpleasant interactions with travelers opposed to administration policies.

Pruitt said that he is not responsible for making decisions about his travel accommodations, telling the Union Leader that his chief of staff and security team make the determinations.

He receives many more threats than his predecessors, E&E News reported in January, and is the first EPA administrator to have a full-time security detail. "We've reached the point where there's not much civility in the marketplace and it's created, you know, it's created some issues and the (security) detail, the level of protection is determined by the level of threat". "They place me on the plane where they think is best from a safety perspective".

The Washington Post reported this week that Pruitt once spent $1,641.63 on a first-class seat for the 90-minute flight from Washington, DC, to New York City to do a television interview about President Trump's decision to withdraw the United States from the Paris climate accord. Taxpayers picked up the tab for his round-trip business-class flight, which cost at least $7,000, several times the cost of what was paid for other staffers who accompanied him on the trip.

The Associated Press reported in July and again in December that spending on commercial airline tickets purchased for Pruitt indicated he was flying in premium-class seats.

The EPA chief has regularly sat in first- and business- class seats during his almost one year leading the agency, generating a storm of controversy.

Federal regulations require government employees to "exercise the same care in incurring expenses that a prudent person would exercise if traveling on personal business. and therefore, should consider the least expensive class of travel that meets their needs".

And at times, fellow airplane passengers have taken to Twitter and Facebook to highlight Pruitt is on board their flight, said Nino Perrotta, the EPA special agent in charge who has protected EPA administrators going back to the George W. Bush administration.

The EPA's inspector general has been auditing Pruitt's travel and recently said the scope of the audit extends through 2017.

EPA Spokesman Jahan Wilcox also said Tuesday that Pruitt had a "blanket waiver" to do so. But the EPA's assistant inspector general for investigations told The Washington Post past year that Pruitt has gotten a higher number of threats than his recent predecessors.

Meanwhile, the White House's budget proposal for EPA released earlier this week seeks to cut $3.7 million, or 9 percent, in funding for Elkins' office.

Police arrest poster of "Round 2 of Florida tomorrow" post
Deputies say the suspect - a ninth grader - stated the Snapchat post was a joke and he didn't have intentions to hurt anyone. The Manatee County Sheriff's Office received various calls regarding a Snapchat message threatening "Round 2 FL Tomorrow". 2/16/2018

Tyronn Lue Sticking With JR Smith Due to NBA Finals Heroics
Lue is very aware of the perception that he's nothing more than a figure head for a team that's truly run by LeBron. I like where we're at right now, and we'll just kind of go from there and see how it plays out". 2/16/2018

Spice Girls have 'signed reunion tour contracts'
The designer continued: "There's something so strong in the message of what the Spice Girls stood for". We will buy out your fashion line if it means you'll tour! It was really, really, really lovely. 2/16/2018

Aliona Savchenko, in fifth Olympic appearance, wins pairs gold with Bruno Massot
She now ties the medal record in Olympic pairs skating with three medals: one gold , two bronze . "She deserved this gold medal". China's pair of Sui Wenjing and Han Con led the field after the short program on Tuesday, and ended up taking silver . 2/16/2018

Jeffrey Tambor Fired From 'Transparent' Amid Claims of Harassment
The allegations came just weeks after the actor's former assistant Van Barnes also came forward to accuse the actor of misconduct. Amazon immediately launched an investigation into the Transparent star on November 8. 2/16/2018

Former New Zealand prime minister Bill English resigns from politics
English said that after 27 years in Parliament he decided during his summer vacation that he wanted a break from politics. Let's hope the National Party leader is as good at baking cakes as he is at making spaghetti pizza. 2/16/2018

The numbing effect of multiple school shootings
Broward County Sheriff Scott Israel talked with reporters late Wednesday about what Cruz had posted online. We had police invade the school, and we were taken out... 2/16/2018

White House admits it knew of red flags in aide's record
On Saturday, the lumpy sack spoke out, tweeting that "peoples (sic) lives are being shattered and destroyed by a mere allegation". Porter resigned from his position after his two ex-wives told the Daily Mail that he physically and emotionally abused them. 2/16/2018

South Korean makes history with skeleton gold
Lee Yong said Yun, the Olympic host country's only gold medal hope in the men's skeleton, is "perfectly" ready for the Games . He's been dominant for so many years. 2/16/2018