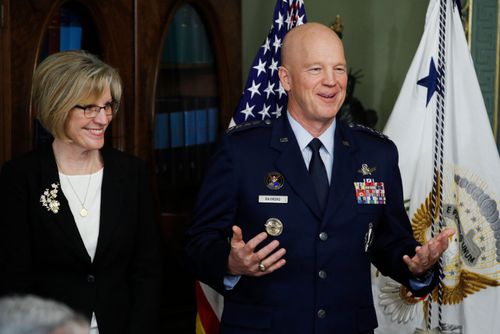 The US has raised concerns over the travel path followed by the Russian satellites with Moscow through diplomatic channels.

Raymond further added that these satellites have been behaving similar to another set of satellites that Russia deployed back in 2017 and which the Russian government characterized as "inspector satellites". The NRO is an agency within the Department of Defense and one of the five main USA intelligence agencies. UU.

Gen. John Raymond confirmed the reports, saying that the "unusual and disturbing behavior" could create a potentially unsafe situation in space.

"The United States finds these recent activities to be concerning and do not reflect the behavior of a responsible spacefaring nation", Raymond said.

"We view this behavior as unusual and disturbing", Raymond, commander of the U.S. Air Force Space Command told Time.

This could potentially usher in a new era of "space war", where weaponized satellites in orbit attempt to gain ground on satellites from other nations.

Kosmos 2542, which was launched in November and split into two separate satellites when it reached earth orbit, is in the same plane as United States of America 245, a secretive satellite launched in 2013 by the National Reconnaissance Office.

CNBC also noted that the Russian spacecraft were as close as 300 kilometers from US 245, in clear view of the U.S. satellite.

The commander compared the two satellites to the satellites launched by Russian Federation in 2017 which reportedly displayed characteristics of a weapon.

This is the first time that the USA military has publicly revealed a direct threat from another country to a US satellite.

The Russian Defence Ministry said in December that a manoeuvre by the satellites - in which one satellite "birthed" another - was an experiment to assess the "technical condition of domestic satellites", according to the Russian news agency TASS.

One of the satellites, called Cosmos-2542, ejected a sub-satellite, Cosmos-2543. The Space Force budget consists of $1.6 billion is for three national-security launches, $1.8 billion will go toward Global Positioning System projects, and $2.5 billion will support "space-based overhead persistent infrared systems", according to a press release by the Department of Defense officials.