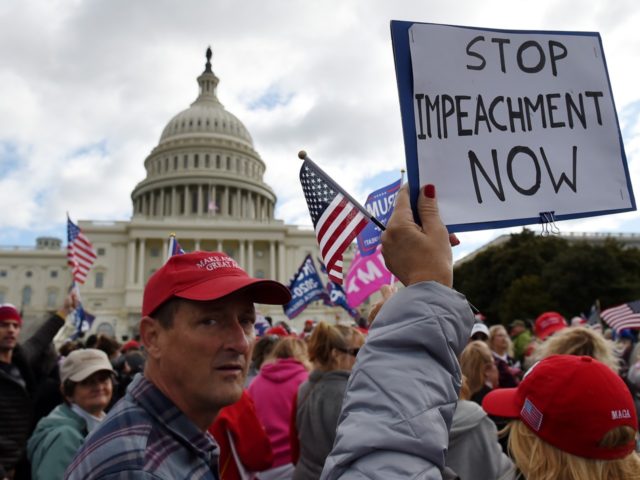 On the eve of the House Judiciary Committee scheduled vote on articles of impeachment against President Donald Trump, Democrats argued late Wednesday that Congress must hold the president accountable, while Republicans charged that the only abuse of power was by the Democrats.

The abuse of power article is focused on Trump's requests to Ukraine and the holdup of aid that was released on September 11, while the obstruction article stems from the president's directive that top officials not participate in the congressional impeachment probe.

In publicly releasing the articles on Tuesday, House Speaker Nancy Pelosi said, "A president who declares himself above accountability, above the American people and above Congress's power of impeachment, which is meant to protect against threats to our democratic institutions, is a president who sees himself as above the law".

In the formal articles announced Tuesday, the Democrats said Trump enlisted a foreign power in "corrupting" the US election process and endangered national security by asking Ukraine to investigate his political rivals, including Biden, while withholding USA military aid as leverage.

The final step in the process would be a trial in the Republican-majority Senate, which Majority Leader Mitch McConnell said Wednesday would happen next month."Assuming that House Democrats send us articles of impeachment next week, a Senate trial will have to be our first item of business in January", McConnell said.

More news: Five Afghans wounded in blast outside main USA base in Kabul

The House Judiciary Committee is due to begin considering those charges at 7 p.m. on Wednesday (0000 GMT) and is expected to approve them on Thursday. According to another survey released by Trump campaign manager Brad Parscale, two more incumbent Democrats could face backlash if they choose to back their party's impeachment efforts.

Rep. David Cicilline, D-R.I., later turned to Republicans, and said, "Wake up". Freshman Democratic Rep. Lucy McBath of Georgia emotionally talked about losing her son to gun violence and said that while impeachment was not why she came to Washington, she wants to "fight for an America that my son Jordan would be proud of". "They don't like the 63 million people who voted for this president, all of us in flyover country, all of us common folk in Ohio, Wisconsin, Tennessee and Texas".

Trump has maintained that he did nothing wrong and that Democrats are trying to undo his victory in the 2016 election.

The articles of impeachment unveiled on Tuesday do not draw on other, more contentious aspects of Trump's tenure, such as his efforts to impede former Special Counsel Robert Mueller's Russian Federation probe.

"They're impeaching me and there are no crimes". The start of debate sets in motion a process that will probably move to a trial in the US Senate.

"The power to impeach is not to punish a president".

The House is expected to vote on the charges, possibly after holding a daylong debate that could involve all 431 of its current legislators. "Stop deflecting and distracting and treating those you represent as if they don't see what's going on, like they're not smart enough to realize that you are willfully ignoring the facts to protect a corrupt and unsafe president".

The Judiciary Committee is expected to take up the articles later this week. "No decisions have been made yet".

More news: McIlroy refuses to play in Saudi, despite US$2.5 mil offer

Trump takes aim at pro-Palestinian movement with executive order
Greenblatt, ADL's CEO, said in a statement . "The rise of anti-Semitic incidents is not theoretical, it's empirical". The movement in recent years has gained momentum in the United States . 12/12/2019

Steven Gerrard close to signing Rangers extension
Danny Mills showered Rangers with praise after it was reported that Jermain Defoe was set to sign a new contract with the club. Gerrard added: "Jermain's is a bit different because he's obviously Bournemouth's player until the end of the year". 12/12/2019

GE2019 | Polls are OPEN - voting information
If you applied for a postal vote then you need to send it to your local authority by 10pm on Thursday 12 December. Applications for an emergency proxy vote can be made up until 5pm on Thursday 12th December. 12/12/2019

Suu Kyi resorts to lies in UN’s top court
She had been imprisoned and then exiled, for fighting to bring human rights and democracy to this longtime military dictatorship. Still, she said the use of disproportionate force by members of the defense services "cannot be ruled out". 12/12/2019

Nokia C1 Android Go Edition smartphone announced
Different details of the smartphone incorporate a Micro-USB port, committed Google Assistant button, and 1GB of RAM. The back of the phone also features a 5MP camera , that too accompanied by an LED flash (obviously). 12/12/2019

General election 2019: Farage in last-ditch appeal to Leave supporters
Mr Farage also repeated his doubts over Mr Johnson's Brexit deal, but added there used to be "aloof time for it to be amended". Mr Farage announced closing month that the Brexit Party wouldn't contest the 317 seats won by the Tories at the 2017 election. 12/12/2019

Twitter users react to #fridgegate when Boris Johnson hid in walk-in chiller
After the confrontation, Mr Johnson went on the milk delivery round and took bottles to homes in the local area. A man later identified as Johnson's press secretary Rob Oxley turned toward him and cursed. 12/12/2019

Pacers' Vic Oladipo revealed on The Masked Singer
The Thingamajig is revealed as VICTOR OLADIPO! He talks about being a portion of the entertainment commerce for 20 years. After The Tree was unmasked as Ana Gasteyer on Tuesday night, two more contestants met their match on Wednesday's show. 12/12/2019