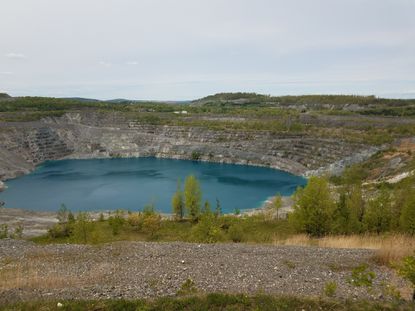 Exhausted of having his town associated with a cancer-causing mineral responsible for killing tens of thousands of people globally, the mayor of Asbestos, Que., says it's time for a name change.

In a telephone interview with a CBC reporter, the mayor says industries and businesses won't set up in the area because they don't want their names associated with the town and the mineral.

Asbestos is home to the Jeffrey mine, which was once the world's largest producer of the commodity and the town's largest employer.

Officials in Asbestos have decided the town's name is holding it back.

The mineral was widely used around the world to insulate buildings, before it was discovered that its fibers lead to various lung conditions and cancers.

The name is not an issue locally because "amiante" is the French word for the mineral, but asbestos, the English word, is of course very well known worldwide, and no longer as something positive.

"I have a local development agent who went to OH and he tried to give his business card and people actually didn't even want to take the card", the mayor said.

In 2018, Canada banned asbestos and asbestos-containing products, with some exceptions.

'As citizens are the ambassadors of a municipality and are the representatives of its vitality, it was obvious that the public would be involved in the process and the choice of the new name, ' Grimard is quoted as saying on Fox News.

The World Health Organization says the inhalation of asbestos fibres causes lung cancer, mesothelioma, and other diseases, and it has killed tens of thousands of people.

A new name for the town has not yet been settled upon, but it will be debated among residents over the coming months.

While it will cost $100,000 to go through with the name change, the Mayor believes the benefits outweigh the costs.

Black hole so huge it 'shouldn't even exist' discovered in our galaxy
And earlier this week, astronomers discovered a black hole that is actually helping baby stars grow instead of destroying them. The black hole's companion is a subgiant B-type star 8.2 times heavier and 9 times larger than the Sun. 12/01/2019

Bigg Boss 13: Sidharth Shukla calls Rashami Desai a ‘drifter’
He then takes leave from the housemates post which they start talking about that one person who will be chosen by them. This fun banter surely lightened the atmosphere in the house of Bigg Boss 13 and everyone was having a gala time. 12/01/2019

University of Cambridge graduate named as London Bridge attack victim
Armed police at the scene of an incident on London Bridge in central London following a police incident, on November 29, 2019. In 2012, police discovered a plot by his terrorist cell to bomb the London Stock Exchange and Khan was sentenced to 8 years. 12/01/2019