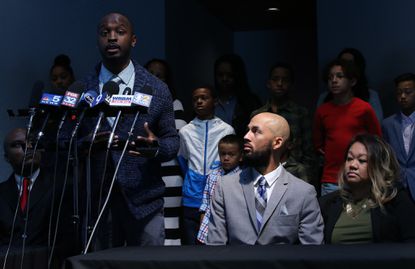 Marcus Riley, Ashley Smith and Mary and Justin Vahl of Montgomery, four of the adults involved in the incident, spoke at the conference, surrounded by the 12 children who were with them at the restaurant.

"We're not surprised that [Buffalo Wild Wings] instituted sensitivity training", Lambert said. Stay tuned for part two of her findings next week. "I responded, 'What does that matter?' and the host said we have a regular customer who doesn't want to sit around black people".

"That racist customer continued to look back at us and give us some dirty looks", Vahl said.

A few moments later, while Vahl and her group were trying to order, an employee came up to them and said that the seats they were in had been previously reserved and so they would have to move.

The question shocked Justin Vahl, whose sole goal in approaching the waiter had been to request three more chairs for the 18-person group, including several children. Both he and Vahl said they struggled to explain to the children what had happened. He also demanded that it thoroughly question prospective employees to make sure they know how to properly deal with "racially charged situations" before they're hired and establish a hotline for any employee who witnesses such an incident in the future.

"In 2019, this type of behaviour should not be accepted because of certain views", Vahl added.

"Now you question every restaurant you walk into", Riley said.

At a sometimes-tearful news conference Tuesday where men, women and children who were in the group talked about their experience, attorney Cannon Lambert said the family wanted to push Buffalo Wild Wings and its parent company, Georgia-based Inspire Brands, to admit that the episode never should have happened.

"We have been in direct communication with the group of guests to understand their account of what happened and have offered our deepest apologies for any unacceptable behaviour", the person said in a statement.