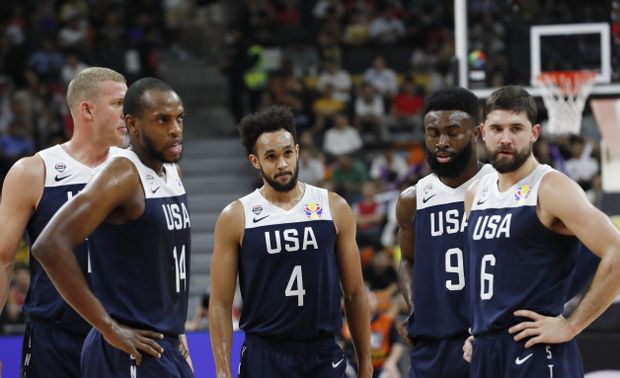 In a battle of Utah Jazz teammates, Rudy Gobert and Les Bleus eliminated would-be World Cup favorites Donovan Mitchell and Team USA with an 89-79 win at Dongfeng Nissan Cultural and Sports Centre in Dongguan, China. It ended a streak of 58 straight global competition wins for the USA squad in which National Basketball Association players participated.

With the quarter-final loss on Wednesday, top ranked United States will fail to capture gold at a major global tournament for the first time since the 2006 world championships.

As well as winning the past two World Cups, they have also won the past three Olympic titles. Ntilikina scored 11 for France.

Much of the discussion surrounding the US will focus on the absence of the NBA's biggest stars, with several big-name players pulling out before the World Cup teams began their training camps - such as Anthony Davis, James Harden and Damian Lillard - yet this is still a side that featured the likes of Kemba Walker, Donavan Mitchell, Jaylen Brown and Harrison Barnes.

Rudy Gobert flew high for an imposing dunk with two minutes to go in the game, and the momentum changed completely in France's favor.

Jazz fans, remember that game in Detroit last season when a fan drew the ire of Mitchell and it inspired the second-year man to lead Utah to a big road win?

Nando De Colo scored 18 for France. As he does in the NBA, Gobert has protected the paint, controlled the glass and found efficient ways to score for France. This version of Team USA will bear no resemblance to the squad that will play in the 2020 Tokyo Olympics.

"We beat the USA, and that's huge, but we haven't won anything yet", France's Nicolas Batum said. Spain awaits the victor of Wednesday's Australia-Czech Republic game in the other semifinal. Boston forward Jayson Tatum didn't play due to an ankle injury.