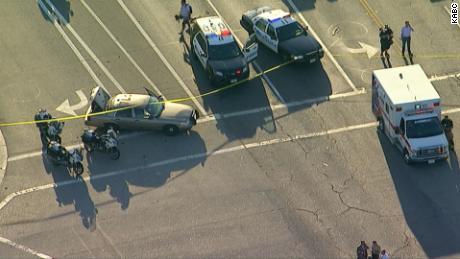 A California Highway Patrol officer and a suspect both died on Monday after gunfire was exchanged following a traffic stop.

The suspect shot the officer with a rifle.

Two other officers were also injured, but their conditions were not immediately known.

A fourth officer responded and killed the driver during the shootout.

Riverside authorities say a CHP officer stopped the suspect driving a GMC pickup truck and then chose to impound the vehicle.

Gov. Newsom issued this statement on Moye's death: "Jennifer and I extend our heartfelt condolences to the family, friends and fellow officers grieving the tragic loss of Officer Moye, who will be remembered for his commitment to serving the Riverside County community and the people of California".

The gun battle broke out near Interstate 215 after Moye pulled a man over driving a white pickup truck. The other officer suffered only minor injuries. The gunman, whose identity has not been released, was also killed, Victor Valley News reported.

Dozens of rounds were fired in the melee, the Los Angeles Times reported.

The Highway Patrol officer and the suspect were rushed to nearby hospitals and declared dead after the shootout, police said.

The slain officer, Moye, graduated from a police academy in 2017 and had been a CHP officer for nearly three years, a release from the governor's office said.

"In honor of Officer Moye, Capitol flags will be flown at half-staff".

Moye was killed about 5:30 p.m. Monday, after he pulled over the shooter in a white GMC pickup for an unknown reason off the 215 freeway and made a decision to impound his truck.

That will be part of a "very long" and "complex" investigation, Railsback said.